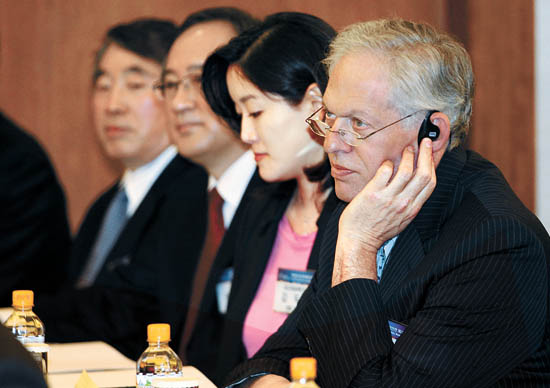 Nuclear energy experts, business leaders and government officials participate in the Nuclear Security and Safety Workshop, yesterday. The event was hosted by the Organizing Committee for the Seoul Nuclear Industry Summit at the Grand InterContinental Hotel in Samseong-dong, southern Seoul. [YONHAP]


Over 100 government officials, nuclear energy experts and business executives yesterday convened in Seoul to attend the Nuclear Security and Safety Workshop in preparation for next year’s Nuclear Industry Summit.

According to the Organizing Committee for the Seoul Nuclear Industry Summit, which hosted the event, participants met to encourage corporate participation in nuclear safety and security.

The summit is due to take place from March 23 to 24 in conjunction with the 2012 Seoul Nuclear Security Summit.

Over 200 nuclear industry leaders and representatives of international organizations are expected to attend in order to help cultivate a better understanding of the need for in-depth cooperation within the industry.

The Seoul Nuclear Security Summit and Seoul Nuclear Industry Summit, which have both already been held once outside Korea, were developed by U.S. President Barack Obama in Washington in April 2010.

“While the Nuclear Industry Summit in Washington served as a platform to build a consensus on the important role industries can play in establishing nuclear security, we will discuss concrete ways for implementing these measures at the Seoul meeting” said Kim Jong-shin, chairman of its organizing committee.

“While the G-20 Summit in Seoul was a crucial opportunity to highlight Korea’s economic development to the world, I believe the Seoul Nuclear Industry Summit will be an opportunity for us to showcase Korea’s advanced nuclear energy development and also make contributions to nuclear security issues on a global level.”

Kim Bong-hyun, Korea’s chief negotiator for the Seoul Nuclear Security Summit, said attendees will discuss ways of safeguarding nuclear facilities against natural disasters, with the aim of pre-empting another crisis similar to the disaster in Fukushima, Japan, in March. Kim said this topic was not discussed at the first summit in Washington, which was entirely focused on reducing the threat of nuclear terrorism.

“Only together will we be successful in the process of nuclear security. That’s why we try to develop a consensus. Nuclear power, in my opinion, is a very important energy source and will be for many years to come.”

The Organizing Committee for the Seoul Nuclear Industry Summit said its three working groups will recommend what should be included in the communique in March after discussing three issues: minimizing the civilian use of highly-enriched uranium, securing sensitive information and making facilities safer post-Fukushima.