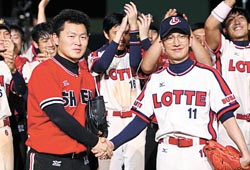 The most remembered baseball match in Korean baseball history is brought to the silver screen by “Perfect Game.”

The film centers on a match between the Lotte Giants and Haitai Tigers (now Kia Tigers) on May 16, 1987. Two legendary pitchers, Choi Dong-won from Lotte, and Sun Dong-yuhl, from Haitai, throw hundreds of balls, but the game ends 2-2 after 15 innings. Sun throws 232 balls, which is the highest for a single game, and Choi throws 209 balls for the game.

Actor Cho Seung-woo (“The War of Flower,” 2006) plays the role of Choi, who died of bowel cancer in September last year, and Yang Dong-geun plays Sun, who still remains active in the baseball scene by serving as a manager of the Kia Tigers.

In order to play their roles, both actors had to spend months in a baseball park. Cho and Yang told media that they needed painkillers at one point of production, as they kept throwing balls.

“I see dead people” is a common phrase used in parody, but if it were true, as it is for the leading lady in “Spellbound,” it would be a shockingly terrifying trait to hold.

Ever since she was young, Yeo-ri (Son Ye-jin), has had the unnatural ability to see ghosts, and when they do appear, usually when she has company, unexpected things occur to the people around her. Yeo-ri chooses to isolate herself from the outside world but is approached by a street magician named Jo-goo (Lee Min-ki), who offers her a job in his show.

One year passes, and Yeo-ri ends up playing a part in the magician’s horror-themed act in which she plays a ghost in a closet. Every day, Jo-goo’s staff successfully close the show and invite Yeo-ri for drinks, but she always rejects their offer. She is fully aware what will happen if she gets close to people.

When eventually Yeo-ri opens up to Jo-goo about her tragic and lonely life, things start to change for the both of them. Can Jo-Goo help her find a way out? Or will he be chased away by the ghosts like all of the other people in Yeo-ri’s life?

The Spy Next Door (All) 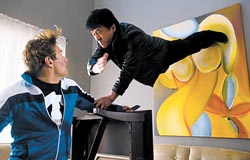 As is obvious from the name, “The Spy Next Door” is a classic story of the next-door neighbor who is more impressive then he might seem at first glance. Quiet-mannered Bob Ho (Jackie Chan) has his life turned upside down when he has to keep watch over his girlfriend’s children, who live right next door.

Though he simply could not be more earnest, Ho is completely lost when it comes to childcare and quickly loses patience with mundane tasks like cooking and cleaning.

And because he fails to impress the high-maintenance children under his care, they only work to make his life harder as they try to get their mother to come home faster. But Ho is forced to reveal his true identity as a foreign spy on loan to the CIA when his arch-nemesis, Anton Poldark (Magnus Scheving), attacks during a babysitting session.

The children’s attitude about Ho changes from annoyance to outright admiration as they join in to fight the terrorist, who hopes to destroy all of the world’s oil reserves except those in his home country, Russia.

This good-humored flick is a fun adventure for the whole family, and Ho’s ally, Colton James (Billy Ray Cyrus), and boss, Glaze (George Lopez), add their own styles of humor to the good-natured storyline. All in all, though the plot of “The Spy Next Door” seems to come out straight out of the fantasy-movie box with few alterations, the diverse set of actors - and some fun mischief from the children in particular - make this film better than average.

Sherlock Holmes: A Game of Shadows (15) 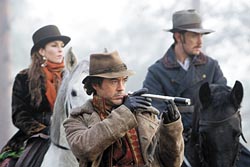 “Sherlock Holmes: A Game of Shadows” sees Robert Downey Jr. and Jude Law reunite as Sherlock Holmes and Dr. Watson in a bid to foil their fiercest adversary, Professor Moriarty.

With plenty of witty dialogue, a comedy English accent by Downey and the addition of Swedish actress Noomi Rapace, “Sherlock Holmes: a Game of Shadows” will please audiences craving a Victorian-era thriller with lots of explosions and shooting.

Somewhat different from the intellectual version often seen in other movies and TV shows, Downey claims his representation of Holmes is based on Conan Doyle’s original description.

On the legitimacy of the movie Downey said, “I’d rather be doing this than some little indie move that everyone says is fantastic and it kind of sucks and is boring.”

The one-minute, 27-second trailer has several explosions and a few “Matrix” style fight scenes. Make of that what you will. 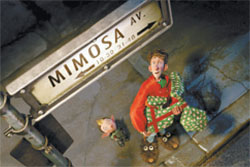 It’s that time of year again when Santa checks his list, prepares his reindeer and sets off on a Christmas Eve journey to deliver presents to children all around the world. And naturally, your kids will have lots of questions about how Santa gets his work done. Well, now there’s a behind-the-scenes tour that can give them an exclusive look at the North Pole, including both the good and the bad.

The new animated flick, “Arthur Christmas,” shows how Santa has brought his operation into the 21st century, complete with a high-tech airship and a command center filled with hundreds of staff and a gift wrap army. But while the technology makes the Christmas Eve operation more precise and efficient, there’s always room for at least one mistake, and when one girl’s present is not delivered, Santa and his family argue, leaving Santa’s youngest son, Arthur, to fix the problem.

As Arthur travels the world struggling to deliver the present without assistance from his family, we learn the downside to technology and realize that many in Santa’s operation, even Santa himself, have lost touch with the Christmas spirit, viewing their work as an industrial operation more than one designed to make children happy.

But not to worry. Santa’s youngest son comes to the rescue, and though your children are sure cringe at Santa’s doubts about Christmas and the seemingly petty arguments he has with his family, the ending will make up for it all. Just make sure to have milk and cookies at home on Christmas Eve, as they’ll certainly want to put some out for Santa and his helpers after seeing all they go through to deliver presents each year.