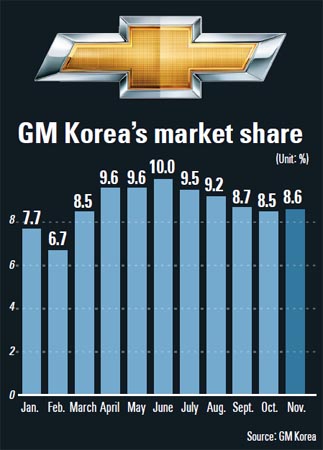 Despite its aggressive marketing and car releases under the Chevrolet brand, GM Korea, the local unit of U.S.-based automaker General Motors, is expected to narrowly miss its target of reaching a double-digit market share this year.

The increasing uncertainties in the global financial market, led by the euro zone debt crisis and a slowdown in U.S. economic growth, have played a major part in GM Korea falling short of its goal.

“Unlike earlier in the year, when we shared our goal of expanding our industry market share to a double-digit figure, economic conditions have worsened as of late,” said an official from the company. “As there are about two weeks left until the end of the year, it will be difficult for us to reach our goal.”

When GM Korea officially launched Chevrolet in Korea this March - simultaneously bidding farewell to its former Daewoo brand - the automaker’s chief executive, Mike Arcamone, had high expectations of laying claim to at least 10 percent of the domestic market.

GM Korea started the year with a gung-ho attitude and brisk sales. In January, it announced it would change its name from GM Daewoo Auto & Technology to GM Korea to build a stronger presence in the market using the more internationally familiar Chevrolet brand.

However, the program is due to expire this month and the automaker has not yet decided whether to extend it through 2012.

This year, the automaker has released a record number of new cars in Korea, including the Orlando, Cruze5, Aveo, Camaro and Malibu, leading to much optimism in terms of projected market growth.

After being acquired by General Motors in 2002, the company has managed to stake a double-digit claim to the market twice, in 2006 and 2007. But it remains to be seen whether it can repeat the feat in the coming fortnight.

According to the automaker, for the first 11 months of this year it sold a total of 127,091 cars in Korea to account for 8.8 percent of total car sales, including foreign imports.

But its market share has been on a downward trend in recent months, dropping from 9.2 percent in August to 8.7 percent in September and 8.5 percent in October before rebounding slightly to 8.6 percent last month.

“The deteriorating economy has led to an overall drop in domestic demand for cars,” the GM Korea official said.

The company’s Korea sales took a turn for the worse after the global economy became more fragile as Standard & Poor’s downgraded the U.S. credit rating in August.

Prior to that, its outlook was rosier. In just two months, the renamed company saw its market share rise to 8.5 percent in March and peak at 10 percent in June before settling in the 9 percent range in July.

In November, GM Korea launched the Chevrolet Malibu, its midsize sedan, in hope of further pushing up sales. Yet it only managed to sell 1,554 units that month.

Meanwhile, local automakers, including Hyundai and Kia, and importers of foreign brands have also been feeling the pinch as sagging demand in the second half has taken its toll across the board.

Overall market conditions have become increasingly volatile in tandem with the global economic slowdown, making consumers more reluctant to open their wallets and fork out money for new cars compared to the previous year.

Now domestic carmakers are battening down the hatches and looking more at overseas markets as the industry is also expected to struggle next year.