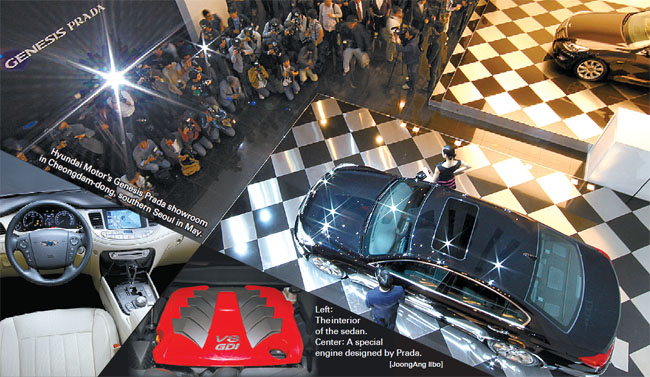 Six months after Hyundai Motor released a special edition of its Genesis sedan, developed in collaboration with Prada, the carmaker is attracting wealthier customers to its brand and helping shake off its overall image as a maker of cheaper, low-class cars.

Hyundai launched the model in Korea in March as it moves to compete with luxury, imported vehicles, and said that it plans to export it to China and the Middle East from next year.

“Hyundai seems to have considered Korea as a test-bed before deciding whether or not to launch its own luxury brand,” said Park Sang-won, an analyst at Eugene Investment & Securities.

Many industry insiders expressed skepticism as to whether the gambit by the country’s largest automaker would work when it first announced it was teaming up with the Italian luxury goods maker to produce the Genesis Prada.

While previous efforts by Korean electronics companies to collaborate with designer labels, such as LG’s Prada phone, which is available worldwide, have proved moderately successful, they were not convinced motorists would be won over by luxury interior decor in a commercial Korean car.

But, as Hyundai Motor said it is on track to meet its sales target of 1,200 units in two years - it has so far shifted 330 domestically - high-end customers seem willing to open their wallets and migrate over to the brand.

“So far, so good,” said an official from Hyundai Motor. “High-end customers who buy the sedan are enjoying its exclusivity, as is the case with other luxury products in the market.”

He said the sales figure was satisfactory but not the main goal.

“What matters is not how many we sell, but the impact that the upgraded image of the Hyundai brand has on higher-end customers.” 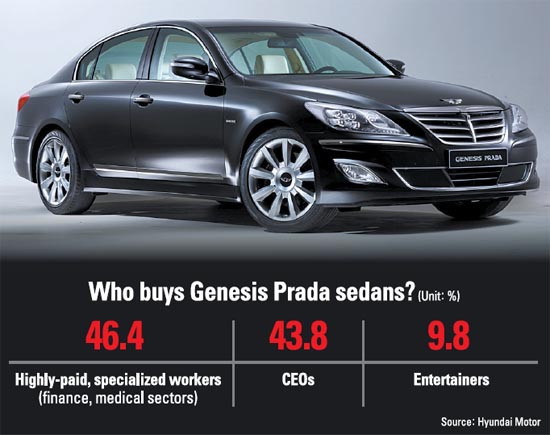 The carmaker said earlier that “the launch of the Genesis Prada sedan has upgraded the image as well as the value of Hyundai in Korea as a whole.”

Its release also marks a shift in gear for the carmaker from mass production to offering customers added value. Unlike other global players like Nissan, which has the Infiniti, and Toyota with its Lexus, Hyundai does not have its own upscale, luxury line.

Designers from Hyundai and Prada teamed up for two years to develop the commercial sedan, which was premiered at the Seoul Motor Show in 2009. At 79 million won ($68,000), the car is 20 percent more expensive than the conventional Genesis. However, it is also loaded with a Tau 5.0 GDi engine - the most powerful in the automaker’s range - which produced 430 horsepower. It has a fuel efficiency of 9 kilometers per liter.

The conventional Genesis is loaded with a 3.8 GDi engine, produces 334 horsepower and is slightly more fuel efficient as it gives 10.2 kilometers per liter.

The newer model comes in black, blue and brown, while the interior reflects Prada’s focus on details using higher-end materials. The seats are covered with saffiano-pattern leather designed by Prada Chairman Patrizio Bertelli.

As part of its “VIP marketing,” the automaker also arranged a private showroom in affluent southern Seoul, which seems to be paying off.

“Visitors to the showroom are mainly owners of imported cars like Mercedes Benz, Audi and BMW,” said Oh Sang-hee, the showroom manager. “They include successful businessmen and star entertainers who usually express deep interest in the different value the Genesis Prada sedan offers.”

Also, based on a recent study conducted by the automaker on the 200 customers that placed preorders in the first 15 business days since its launch, one of the main reasons why they planned to purchase it was because of its exclusivity. The majority saw it as a luxury collectors’ item.

Following the model’s launch and the satisfactory response by customers, Hyundai plans on exporting the vehicle to China in the first half of next year and then to other regions such as the Middle East.

“The demand for luxury goods in China is high, and we plan on promoting VIP marketing there as well,” the Hyundai Motor official said, noting that the automaker already showcased it at the Guangzhou Motor Show in South China last month for the first time overseas.

“This represents a fresh new marketing attempt [by Hyundai], but it remains to be seen if the product will be well received by customers in Korea and elsewhere,” said Park at Eugene Investment & Securities.