This is the year that most banking sector workers and corporate executives born in 1958 retire.

While the retirement age is from 55 to 58 depending on the sector, it is common that most Korean company workers end up leaving their jobs several years earlier than retirement ages set by companies - sometimes even 10 years earlier. This harsh reality has even generated a Korean word, “sa-o-jeong,” meaning the age 45 is the de facto retirement age. Many Korean company workers commonly agonize over quitting their jobs by the time they reach 40 amid the economic crunch.

Homeplus CEO Lee Seung-han, however, said companies should rediscover the value of middle-aged and older workers to retain experience and improve the productivity of a firm.

“When I extend the retirement age of all employees, the company will face more financial burden in terms of salaries,” Lee said in an interview with the JoongAng Ilbo yesterday.

“But I believe this will absolutely boost the company’s competitiveness. We’re in an era in which only a company that has high job security can sustain growth. The retail industry reached limits to grow further, and as a way to achieve higher growth, we decided to raise the retirement age.” 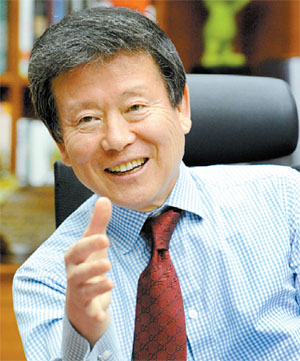 The nation’s second-largest retailer officially announced on Tuesday that it will raise the retirement age of its entire 21,000 employees to 60 from the current 55, which is completely unprecedented in the history of local retailers in Korea. The company’s new policy immediately came into effect on Tuesday.

Homeplus estimates a total of 2,000 workers will benefit from retirement age extension for the next five years and that it needs to inject extra 13 billion won ($11 million) to keep them.

“As we witnessed from the Occupy Wall Street protests, the gap between the rich and the poor has intensified worldwide and this has become a serious social problem,” Lee said.

“A company can hardly achieve a new level of growth without fulfilling corporate social responsibility. As a way of contributing back to society, we extended the retirement age.”

Lee said 55 isn’t an obstacle in this era.

Given that people live to the age of 100 thanks to enhanced medical treatment and healthier diets, he said it’s not right to force 55-year-olds with remaining ability and passion to leave their jobs.

When asked what positive aspects Homeplus can enjoy with the extension, Lee said employees will feel psychologically relaxed about working for the company even if they get older year by year and this will enhance the company’s productivity.

“When experienced employees retire, we have a vacuum in service,” he said.

“When we hire new employees, we invest money in educating them. In conclusion, it actually helps to better the company if we keep experienced workers.” 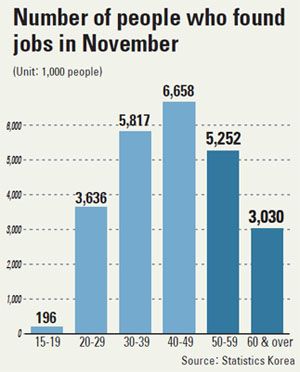 Prior to launching the new policy, Homeplus had been recruiting people aged between 50 and 65 since 2008 as a way to help baby boomers born after the Korean War to have a viable source of income.

There are currently 180 of them, according to the company.

Market observers here are now paying attention to whether Homeplus’ decision will have any impact on other rival retailers as well as other industries, especially in difficult times when many choose to take the completely opposite direction from Homeplus.

“I hope Homeplus’ decision to extend the retirement age limit will further spread to other companies in our aging society,” an industry source said.