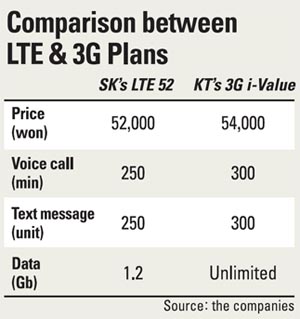 After the news that KT is likely to start selling the newest long-term evolution (LTE) smartphones on third-generation (3G) calling plans was released, the mobile carrier is being criticized for violating standard market practices.

SK Telecom, the country’s largest mobile carrier, and LG U+, the No. 3 player, have been moving to upgrade the industry to 4G networks and LTE handsets, which offer faster data-processing speeds.

KT also wants to jump on the 4G bandwagon but found its hands tied by a recent preliminary injunction by a Seoul court blocking its plan to shut down its 2G network, which KT said it needed to do first before migrating customers over to the new network. 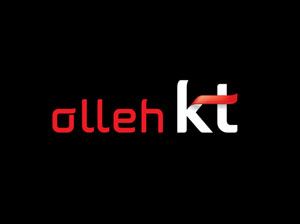 “It is standard market practice that a new mobile service should be launched when the service provider has prepared three things: the handset, the network and the calling plan,” an official from SKT said. “But KT has not prepared anything other than the phone.”

An official from LG U+ said that KT’s plan will infuriate customers, adding that this was not the first time the carrier has tried to take shortcuts at subscribers’ expense.

“The company will face complaints from consumers if it can’t provide a 4G service soon for those who have bought these expensive handsets,” he said. Most of the hottest new LTE phones cost around 1 million won ($862).

However, far from being discouraged by its rivals’ opposition, KT said it is planning to accelerate the plan.

“It is better for us to start selling [LTE phones] as early as possible,” said an official at KT yesterday. “We plan to unveil the plan this weekend or next week.”

According to the official, KT is rushing to embrace LTE phones as it cannot afford to get left behind in a fiercely competitive industry. Although the company has appealed the court’s decision - made in a bid to protect the interests of KT’s remaining 2G subscribers - KT said it cannot await the verdict due to the potential profits it will lose over the peak Christmas and New Year period.

“Because the telecom industry changes about every six months, we can’t just sit by and wait for the court ruling,” the official said.

He added that selling LTE phones on 3G calling plans will be a temporary measure until the 4G mobile service becomes available nationwide. It is currently only available in Seoul.

KT is now in the final stages of making a decision over whether it will sell the latest LTE smartphones, especially Samsung Electronics’ Galaxy Note and Pantech Sky’s Vega LTE M, according to the industry.

But SKT has criticized KT, saying that it is putting its own interests ahead of those of the whole industry.

“Because the calling plans for LTE phones are more expensive than those for handsets that run on 3G networks, the telecom industry, which has been seeing losses due to overly heated price competition, has been able to turn a profit,” said the SKT employee.