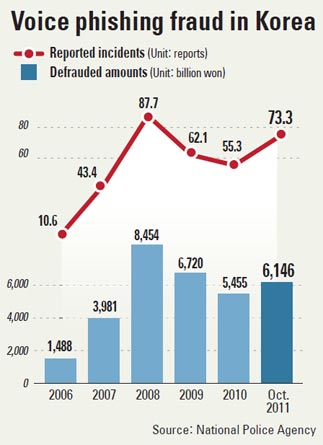 Heo Woong, an office worker in his 30s, was sick and bed-ridden at his home in Seoul on Dec. 5 when he received an unexpected phone call from someone claiming to represent Korea’s Ministry of Justice.

That exchange quickly led to Heo being hoodwinked into surrendering his bank account and credit card information to a total stranger.

And in the digital equivalent of a blink of an eye, 26.8 million won ($23,150) was taken out under Heo’s name in the form of loans at three credit card companies. The perpetrators managed to get the loans approved by calling the companies’ loan hotlines and punching Heo’s personal information into the computerized voice response system.

One of the things that alarmed the victim the most about the affair, he said, was the ease with which Hyundai Card had approved a whopping 10 million won in card loans. Heo was not even aware of when or how his borrowing limit had increased from 3 million won.

“I can’t believe this happened,” he said. “I’m getting married in March, and I had intended to take out loans for the wedding costs and foot the lump-sum payment for a house. Now, with all these card loans on my credit history, I’ll never be able to get the loans approved.”

Ever-evolving instances of “voice phishing” have increasingly exploited local card companies’ notoriously lax screening processes for the approval of credit card loans or for multiple loans taken out in a victims’ name, saddling those unfortunate enough to get scammed with high levels of debt and sending their credit histories into no man’s land.

Although financial regulators earlier rolled out measures to try and block easy access to card loans, delayed compliance by credit card companies has created room for more account holders to be defrauded.

According to the Financial Supervisory Service (FSS), the amount of credit card loans that were illegally taken out through voice phishing in Korea has been skyrocketing lately. In the first quarter of this year, nine cases were reported worth a total of 100 million won. Then the trend exploded, with a whopping 917 reported incidents worth 9.2 billion won during the month-and-a-half period between Oct. 1 and Nov. 15.

Critics point out that this new wave of phone-based fraud targeting credit card loans would hardly have been possible but for the lack of regulations overseeing the loan application and approval process.

They are primarily utilized as a revenue-making venture by local credit card firms, which are locked in heated competition and also suffering from recently cut transaction fees. As such, they have tended to make it easy to get loans in a bid to drum up business.

Until last month, credit card users found themselves instantly approved for card loans simply by qualifying for a credit card, without any additional documentation needed.

Customers, or impersonators, could then get their hands on the money within minutes by applying for the loan just by making a phone call or visiting a Web site.

And with the advent of voice phishing, victims reported that their card loan limits had jumped without their knowledge from zero to 12 million won in one month for no apparent reason. The FSS ordered credit card companies in June and October to strengthen the verification process for credit card loans, but cases continued in November and this month.