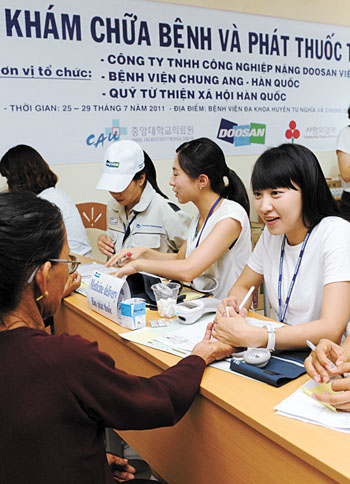 To activate the management philosophy of sharing dreams and hopes in society, Doosan set up a social contribution department in 2010.

The social contribution activities of Yonkang Foundation and Doosan subsidiaries are numerous.

The Doosan group’s Yonkang Foundation was established in 1978 to honor the will of the late “Yonkang” Park Too-pyung, the founder of Doosan. Since its foundation it has been supporting various educational programs such as supporting academic research funds, sending teachers for overseas training and operating the Doosan Art Center.

In October 2010, to celebrate the 100th anniversary of founder Park Too-pyung’s birth, it presented the Yonkang Art Award to artists under the age of 40 who have great potential and can show the outstanding beauty of Korean art.

Doosan Heavy Industries and Construction has a social volunteer group with 6,000 employees. Through a specialized and customized social contribution program it is forming a CSR Partnership.

Doosan VINA, the company’s Vietnamese operation, has helped with funding to pay for surgery for children with cleft lips in association with Chung-Ang University Medical Center. They also donated medical equipment and nutritional supplements.

Also by organizing the Doosan VINA volunteer group, which has 1,000 Vietnamese employees, the company is conducting various localized volunteer activities as well as providing scholarships to major universities.

Another Doosan subsidiary, Doosan Infracore, routinely provides equipment that is used in various disaster sites around the world to help recovery efforts.

The company provided excavators and other earth moving equipment to the Asian earthquake and tsunami site in 2004 and to the Southwest region of the U.S after hurricane Katrina in 2005.