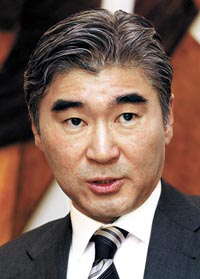 The long-stalled six-party talks can resume when North Korea assures the international community that it will not attend the negotiations halfheartedly, the new U.S. ambassador to Korea said yesterday.

In his first interview since taking up the post last month, Ambassador Sung Kim said that the United States and the other member nations were serious about resuming “real” and “substantive” negotiations but that restarting the talks were in North Korea’s hands.

“It’s not what we do or what the ROK does. It’s what the North Koreans are willing to do,” Kim told select members of local media at the U.S. Embassy.

Kim, who served as the U.S. representative to the six-party talks before becoming ambassador, is one of the top experts on North Korea in the American government.

He said the Obama administration in its early years sent an open message to the North, indicating Washington’s interest in one-on-one negotiations, but the North answered with a missile launch, nuclear test and two major provocations on the South.

“If they are also committed to following with joint statement and abiding by UN Security Council resolutions, then we could have meaningful dialogue,” Kim said, referring to the Sept. 19, 2005 statement issued at the fourth round of the six-party talks in which the North pledged to denuclearize.

Washington and Pyongyang are said to be planning a third round of bilateral talks, a move some expect could lay the grounds for the resumption of the six-party negotiations. Kim said nothing had been decided yet.

The ambassador said it was important for Seoul and Washington to maintain strong deterrence and coordination for effective countermeasures against rising uncertainty from the North, which will celebrate next year its stated goal of becoming a “strong” and “prosperous” country.

Kim, the first U.S. ambassador of Korean origin to serve in Korea, said his knowledge of Korea and his respect and affection for his native country would serve as assets as the top U.S. envoy here. He added that his Korean background allowed him a deep understanding of the importance of the Korea-U.S. alliance.

The only downside to his Korean heritage, he said, is the high expectations of the Korean public. “I will work very hard. I think I’m an O.K. diplomat,” he said. “But I’m not a superman.”

Kim said the ongoing protests in Korea over the investor-state dispute settlement clause in the Korea-U.S. free trade agreement were caused by misunderstandings, pointing out that Korea has the same clause in many of its bilateral trade pacts. He also reiterated Washington’s position that it was ready to re-discuss the issue.

He expressed regret for the recent crimes involving U.S. military personnel but said he did not agree with calls from some for revising the U.S.-ROK Status of Forces Agreement. Calling it an agreement that has “served both countries well,” Kim said he would try to resolve any concerns raised about SOFA through existing mechanisms.

Kim also spoke highly of his predecessor, Kathleen Stephens, and said he would also communicate with the public. Although he has started a blog, Kim said he was looking for ways to make better use of social networking services.