With a year left in his term, President Lee Myung-bak finds himself in the hot seat as a series of scandals unfold around the first family and his own ruling party considers parting company with him.

The latest in the string of corruption allegations involving the president’s family came Wednesday when Lee’s cousin-in-law was arrested. Kim Jae-hong, a cousin of the first lady, Kim Yoon-ok, was arrested on charges of receiving 400 million won ($344,000) from the head of the troubled Jeil Savings Bank in return for using his influence to stop the closing of the bank. Despite his alleged lobbying, the bank was suspended by financial authorities in September. He is the second presidential relative to be arrested and investigated for corruption. In 2008, another cousin of the first lady was arrested and convicted of receiving money in return for her influence in the general election nomination process of the ruling Grand National Party and in helping people get jobs at state-run firms. 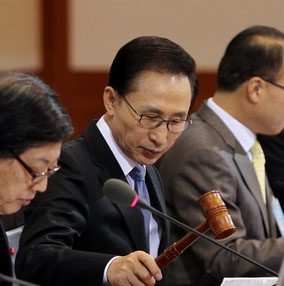 Recently, an aide to Lee’s elder brother, Representative Lee Sang-deuk, was arrested on charges of receiving large bribes from a businessman for influence peddling. That forced the president’s brother to retire from politics.

The corruption allegations are tainting the image of Lee, who promised to work to make Korea a fairer society. Stressing that he had won the presidency free from any illegal political funding, Lee has stressed that his administration’s reputation should be spotless. Lee’s plummeting popularity has forced the ruling party to distance itself from him. This week, some lawmakers openly demanded that Lee leave the party to allow it to overhaul its image.

Although Lee said in February that he thinks of his presidency as a relay race on a flat field, not mountain climbing, political analysts said Lee can’t escape the fate of all Korean presidents, which is to get dragged into scandal at the ends of their terms. Some say Lee’s descent is swifter than the late former President Roh Moo-hyun.

Roh suffered from plummeting popularity as his term progressed, and at the very end, he once confessed, “I don’t want to be the first president who failed to complete the term.” Roh’s ruling party forced him to leave the party, although no corruption scandals were revealed at the time.

“The situation is actually worse for Lee because his relationship with the public is not a love-and-hate relationship,” said Whang Sang-min, professor of psychology at Yonsei University.