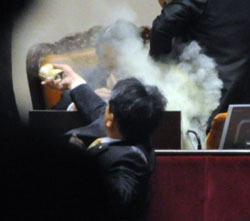 Prosecutors yesterday issued a summons for Representative Kim Sun-dong, who fired tear gas in the National Assembly last month during the ratification of the Korea-U.S. free trade agreement, to appear for questioning next week.

Kim, a Democratic Labor Party lawmaker, has refused requests from prosecutors over the past week to show up for an investigation into accusations that he obstructed government affairs and created a disturbance in the National Assembly.

In response, the Supreme Prosecutors’ Office announced yesterday that it had issued a summons for Kim to appear at 2 p.m. on Dec. 19.

A prosecution official said that it was now necessary to receive Kim’s testimony because prosecutors had collected information and testimony from witnesses and had finished reviewing CCTV footage of the incident in the Assembly’s main chamber.

Kim sprayed tear gas from a canister at the speakers’ podium on Nov. 22 in the midst of the Grand National Party’s surprise vote to ratify the long-contested free trade agreement, which passed despite intense resistance from opposition lawmakers.

Meanwhile, prosecutors said that Kim’s representatives told them last week that it would be difficult for the lawmaker to appear in front of prosecutors because his schedule was filled until the end of December.

This is not the first time Kim has ignored a prosecutors’ summons.

Between 2007 and 2008, after prosecutors discovered undeclared bank accounts belonging to the Democratic Labor Party that held illegal political funds worth 14 billion won, prosecutors issued summonses for Kim, who was the party’s secretary general at the time, to question him on his involvement. Kim did not respond to those summonses as well.