Seocho gets a park that doubles as a crematorium

Seocho gets a park that doubles as a crematorium 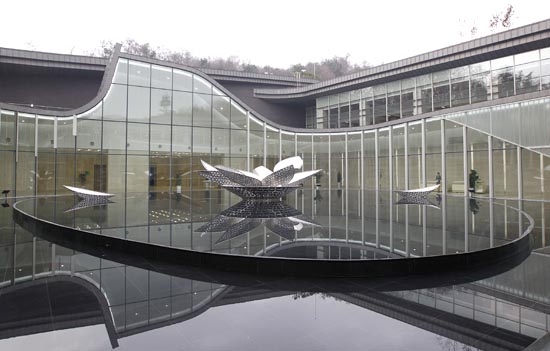 After 14 years of planning and not-in-my-backyard protests, Seoul Memorial Park was completed yesterday and features 11 low-pollution furnaces, a large charnel house and plenty of parkland. [YONHAP]

But the protests weren’t in vain: The crematorium is surrounded by 170,000 square meters (42 acres) of park with cultural facilities like an art gallery, which made the project more palatable to nearby residents.

The Seoul Memorial Park was completed yesterday and features 11 low-pollution furnaces and a large charnel house, according to the Seoul Metropolitan Government.

The city government said that the crematorium is expected to handle 65 corpses per day in full operation. At the completion ceremony, Seoul Mayor Park Won-soon and former Seoul mayor Goh Kun, who dreamt up the project, attended.

“The project for the first crematorium facility in Seoul has finally come to bear fruit,” Park said.

Seocho District residents didn’t like the idea at all, worried the crematorium would foul the air and be an ugly blot on its landscape. They filed mountains of petitions with their local district office and took the city to court.

After 432 meetings between city officials and residents, the city agreed to build a park around the facility, bury much of it 12 meters (40 feet) in the ground and put three-meter walls around it. It also promised an air purification system to prevent pollution.

“We expect Seoul Memorial Park will change many people’s perspective on a public facility such as a crematorium,” Lee Jeong-kwan, an official of the Seoul Metropolitan Government, told the Korea JoongAng Daily. “The facility was able to be completed because officials of the city government and residents in Seocho District cooperated.”