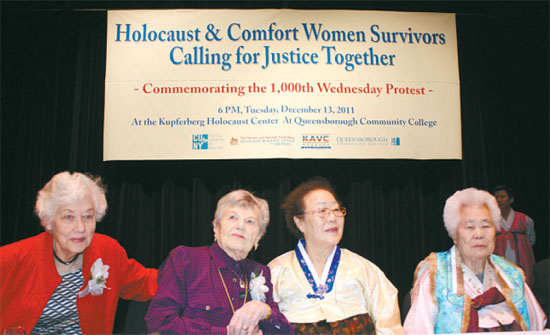 
After 20 years of weekly protests, former sex slaves of the Japanese military and their supporters held their 1,000th protest outside Japan’s embassy in Seoul, vowing to continue their struggle for an apology and compensation for their suffering during World War II.

Hundreds of supporters of the so-called comfort women occupied the street in front of the Japanese Embassy in Jongno, central Seoul, yesterday, 10 times the number of protestors on other Wednesdays. The protests have been held weekly since January 1992.

“Coming to this 1,000th demonstration, I am not sure whether it is a day to celebrate or to be sad,” Kwon Hae-hyo, an actor-turned-civic activist who emceed yesterday’s event, said at the start of the one-hour protest. “Every demonstration’s intention was to be the last.”

The Japanese government is deaf to the calls of the women and their supporters, claiming the 1965 Korea-Japan treaties that normalized relations between the two countries exempts it from paying individual compensation for wrongdoings during its 1910-45 colonial rule of the Korean Peninsula, including issues that emerged later, such as that of the comfort women.

Five former comfort women attended Wednesday’s protest and hugged a statue of a hanbok-clad teenage girl, named Peace Monument, which was set up outside the embassy as a symbol of permanent protest.

The monument has created a diplomatic row between the two governments. Tokyo asked Seoul to prevent the monument being erected outside the embassy.

The Blue House announced yesterday that President Lee Myung-bak will visit Japan Saturday on a long-expected trip. Lee will visit Kyoto on Saturday at the invitation of Japanese Prime Minister Yoshihiko Noda and will have a summit on Sunday.

A senior Blue House official said yesterday that the issue of the comfort women could be discussed during Lee’s summit with Noda.

According to the organizer of Wednesday’s demonstration, the Korean Council for the Women Drafted for Military Sexual Slavery by Japan, civic groups overseas staged their own demonstration in more than 20 countries on the same day. In Japan, hundreds of civic activists formed a human chain surrounding Tokyo’s Foreign Ministry building.

In a New York press conference attended by around 200 people, the room fell to a hush when the four women - Yi Ok-seon and Lee Yong-soo from Korea and Ethel Katz and Hanne Liebmann, who live in the U.S. - started giving accounts of their suffering at the hands of the Japanese and Germans. Liebeman said Germany committed violence against young women but it apologized after the war and called on Japan to do so.

One Japanese legal expert challenged Tokyo’s claim that the 1965 treaties exempts it from further claims. Kohki Abe, a professor of international law at Kanagawa University Law School in Yokohama, said in a recent e-mail interview with the Korea JoongAng Daily the comfort women issue was not included in the treaties.

“When the 1965 agreement was drafted, the issue of comfort women was not deliberated and thus was outside the scope of the agreement,” Abe said. “In terms of the object and purpose of the agreement, it is reasonably deemed that grave humanitarian issues are not covered therein.”