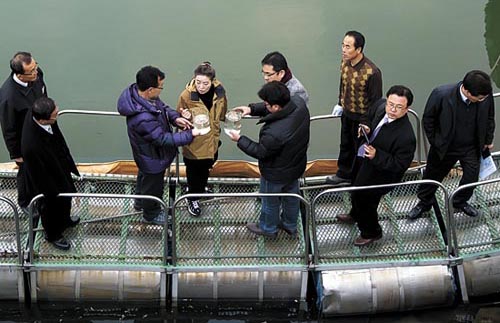 Officials from the Ministry of Environment test water quality at the Paldang Dam reservoir on Wednesday. [YONHAP]


There’s something in the water, and it doesn’t smell so good.

An earthy odor from the tap water in Seoul and parts of Gyeonggi and Incheon has residents upset and wary of drinking from the tap for the past month, leaving officials scrambling to figure out the source of the stink.

Officials from the Ministry of Environment rushed to the Paldang Dam reservoir in Gyeonggi, the source of Seoul’s water, and discovered higher-than-normal concentrations of geosmin, a harmless organic compound that is produced by microbes and releases an earthy aroma.

The ministry and officials from the Seoul Metropolitan Government’s Office of Waterworks believe that the high concentrations of geosmin were caused by higher-than-average temperatures in November and that the problem will subside once the weather gets colder.

“The average temperature for November was 4.4 degrees Celsius [7.9 degrees Fahrenheit] higher than last year,” Lee Seong-jae, director of water quality in the Office of Waterworks, told the Korea JoongAng Daily. “We think that more microbes were produced under those conditions.”

Since mid-November, local district offices in Seoul and its neighboring areas have received a flood of complaints from residents about the smell of the tap water. According to the Office of Waterworks, areas in Seoul suffering from the stink are Dongjak, Gwanak, Gangdong, Jung and Seodaemun districts. It is unknown how many homes have been affected.

In addition to higher temperatures, Lee said the water in Paldang Dam reservoir may have become warmer because of the lack of water recently released by the dam, indicated by officials’ discovery of algal bloom in the reservoir. “When a dam discharges water, it produces strong waves and it maintains the water’s temperature at the appropriate level.”

To stop the smell, the city government has begun adding activated carbon powders to its filtration plants in Seoul at a daily cost of 150 million won ($129,000). Seoul officials have also decided to improve the city’s filtration plants by 2015 so that geosmin can be removed from tap water. Although geosmin is harmless to people, the city government advised people to boil the water before drinking it in order to remove the smell.

Water officials have come under by fire from both residents holding their noses and experts, who say the city’s water had not been properly managed. “The Ministry of Environment and the city government have delayed work on something that they shouldn’t have,” said Choi Eui-so, a professor at Korea University. “Although they decided to improve water facilities, we still have to wait three years.”