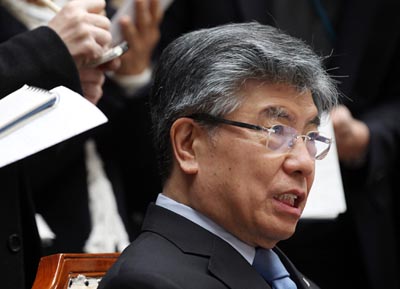 Korea’s economic growth for next year will be largely fuelled by domestic demand rather than exports, according to Bank of Korea Governor Kim Choong-soo, yesterday.

In a meeting with local bank heads at the central bank headquarters in central Seoul, Kim said that despite the projected drop in overall exports due to decreased demand from traditional markets like the European Union and the United States due to their financial difficulties, Korea’s economy will be boosted by increased domestic spending.

“You can think that next year’s economic growth for Korea will decline compared to this year,” Kim said.

“But we can think differently.”

“For local private banks, domestic demand is important so [business] conditions for next year will not be bad,” he said.

“Although it is too early to predict because there are variables like the exchange rate, which are affected by external conditions, banks may be smiling a year from now.”

Greater domestic spending should help Korea strengthen its economic fundamentals as it shifts from being an export-oriented economy to a domestic-oriented one.

More than half the country’s economy runs on exports, which has raised concerns of excess dependence on exports and their vulnerability to economic problems abroad.

The BOK recently revised its forecast for the country’s economic growth next year from a 4.6 percent estimate in June to 3.7 percent, citing a global economic contraction due to risks stemming from Europe.

The level of global economic uncertainty has grown in the latter half of this year, casting doubts over Korea’s ability to manage external vulnerabilities.

The BOK also forecast that export growth will drop from an estimated 11.6 percent for this year to 5 percent next year as demand for Korean-made goods from major export partners will drop.

This month, Korea joined the $1 trillion trade club - for the first time annual trade surpassed the $1 trillion mark - but concerns are mounting it won’t be able to maintain that status. The government has been diversifying exports to more emerging economies.