Audi’s new A6 is stylish, quick on uptake, light

Audi’s new A6 is stylish, quick on uptake, light 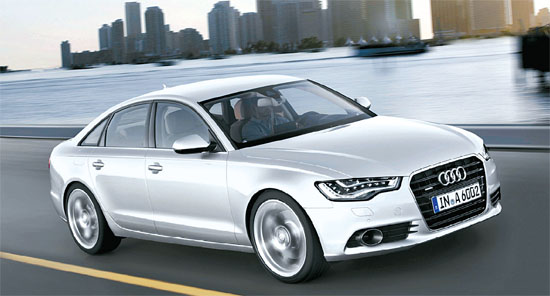 The Audi A6 is a sporty luxury sedan with power. It is quick and nimble and lives up to expectation. Provided by the company


What amazed me when I drove new A6 from Audi was the car’s lightness. It was incredibly light for a car of its size. According to the German automaker, it reduced the weight of the A6 by as much as 135 kilograms (300 pounds) from its predecessor.

The effect of the slimming down is remarkable. Audi is well known for using aluminum alloys to decrease the weight of its cars weight and as a result its fleet is getting lighter and lighter.

The new A6 was released in late August. It is the first full model change since 2004. 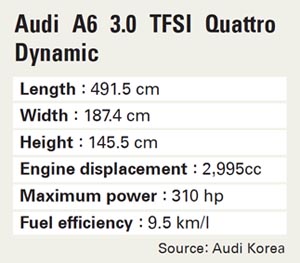 Visually, there aren’t many changes from the previous model except in the headlights and tail lamps.

The front grill, which stretches down through the bumper, is unmistakably Audi. The new A6 is actually shorter in length and height and a bit wider, although those changes are minimal. The headlights are designed to resemble hawk eyes.

The interior looks great as well, modern and sporty, and the monitor that pops up when the engine starts is very cool.

What I liked about the entertainment system is that the Bluetooth phone function instantly downloaded a list of phone numbers from my smartphone onto the screen. This is quite convenient because in other systems, drivers need to punch in numbers or download them manually. The head-up display, which shows information on the front windshield, was also very convenient.

The A6 does not have a touch-screen navigation system.

Audi seems to be slow in adopting touch screen monitors, which are common in locally produced vehicles and even some imported cars such as the Mercedes-Benz CLS-Class.

What I didn’t like about the design of the dashboard is that some buttons such as media and radio were located near the transmission and since I was not familiar with them, I had to look down every time to find them. I thought they should be located higher up for safety’s sake. Or the buttons should be simplified so drivers don’t have to look down when they are driving.

I took the A6 3.0 TFSI Quattro Dynamic for a drive, and of course, it was as nimble as it was light. With a powerful engine that can produce 310 horsepower, I felt the car accelerated nicely. According to the company, it can reach 100 kilometers (62 miles) per hour in only 5.8 seconds.

The A6 is the bestselling Audi model. It has sold more than 7 million units so far. The A6 competes directly with the BMW 5 Series and Mercedes-Benz’s E-Class but it has not caught up with its rivals despite the fact that vehicle sales usually peak in the first few months of their debut. There seems to be still a long way to go for Audi to get the same attention as its rivals.