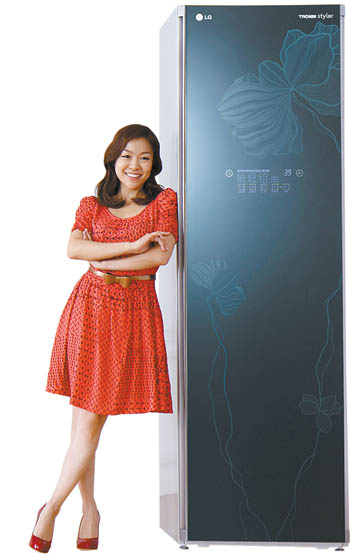 A still from the LG Tromm Styler music video featuring Lena Park. Provided by each company

Lena Park, one of the hottest Korean singers, is not singing about love and heartbreak as she usually does.

She’s singing about a home appliance: why it’s useful and what it can do for you.

LG Electronics, the Korean consumer electronics giant, announced recently that it has made a music video starring Park that is aimed at showing people how to use its Tromm Styler.

The Tromm Styler is a refrigerator-sized electronic wardrobe that dries, steam presses and sterilizes clothes.

The video was released through YouTube and shown on outdoor screens in nine downtown areas like Gwanghwamun, Seoul Station, Samseong Station and Gangnam Station.

“We wanted to let people know in a friendly manner how the Styler can be used for multiple purposes,” said Kim Jeong-tae, a marketing director at LG’s home appliance unit.

“It’s a new-concept product, so we wanted to think outside the box and try interactive marketing where we can engage consumers more.”

The Tromm Styler is a pricey item, selling for around 2 million won ($1,848), prompting LG to originally project a conservative sales target of 7,000 units in Korea this year.

But it has turned out to be a hit, having already sold 11,000 units since its March release.

The company now aims to sell 30,000 globally this year. 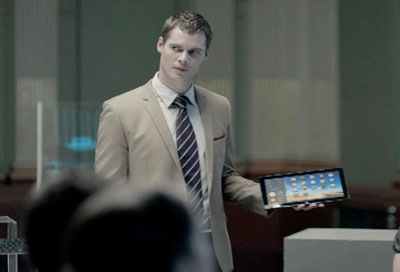 A Samsung Slate PC ad that is like a mini-blockbuster.

Samsung Electronics announced last month that it has made the industry’s first three-minute TV ad to promote its latest tablet PC, the Slate PC Series 7. That’s a long stretch from the usual TV commercials.

With characters and plot, the advertisement is more of a mini-movie than a standard sales pitch.

In fact, it’s like a mini-summer blockbuster: the main characters include a man with supernatural powers and secrets, a gorgeous woman and an antagonist who is jealous of the main character and tries to sabotage his moves.

“We opted for a soap opera-type of framework instead of the conventional 15 second ad in order to effectively let people know of how to use the Slate PC, which is a new type of PC,” said Sohn Jeong-hwan, a Samsung Electronics vice president.

Samsung said that the 12.9-mm thick device combines the portability of a tablet computer with the performance of a laptop.

It comes with Microsoft’s Windows 7 OS, enabling users to work in Office programs like Word and Excel.

Korean telecom companies are also using witty ads to explain the their fourth-generation (4G) wireless communications technology - LTE (Long Term Evolution), which could have been arcane to the average phone user.

KT, the country’s largest fixed-line operator and No.2 mobile carrier, is referencing Koreans’ tendency to do things in a hurry, known as the ppali-ppali (rush-rush) mentality, in three different ads to highlight LTE’s biggest feature, which is greater speed.

LTE is thought to be five to seven times faster than 3G services in processing data.

One version shows a person putting his hands in a coffee machine even before the coffee is ready.

In fact, KT wins the ppali-ppali award for its LTE ads.

The company hasn’t even launched its commercial LTE service, but the ads are running. (It plans to do so soon.)

SK Telecom’s ad for its LTE service also highlights the concept of speed with ads that say: “So fast that you go to work on Monday and finish work Friday,” “You enlist and get discharged,” “You are a high school senior and then a freshman at college.”

SK Telecom and LG U+ - the country’s No.1 and No.3 mobile carriers - launched commercial service of LTE in July.