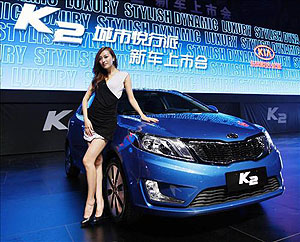 Kia achieved record China sales of 45,768 units last month with the newly launched midsize sedan K2 leading the way, the officials said. The K2 hit showrooms in China in July and has proven a big hit with sales exceeding the 10,000 mark in September.

Market watchers expect that the company will be able to sustain its strong momentum in China with its third Chinese plant expected to start production in the second half of 2014. Earlier this month, Kia’s sales in China surpassed the 400,000 mark this year, marking the company’s best-ever sales figure in the world’s largest car market. The automaker has become the eight-largest carmaker in China in terms of the number of units sold, the officials said.