Kibot 2 can watch the kids when folks are out

Kibot 2 can watch the kids when folks are out 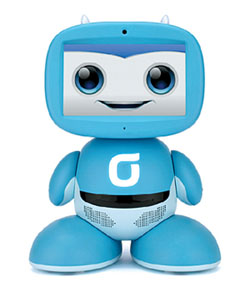 Parents looking for Christmas presents for their children have a new option: a robot that can both educate and entertain them.

It can also watch over the kids when the parents are away from home.

KT unveiled the Kibot 2, an upgraded version of the first Kibot, which won the presidential prize at the 2011 Korea Robot Awards hosted by the Ministry of Knowledge Economy in April.

The upgraded Kibot 2 is a robot that has education content for toddlers through elementary school students.

The mobile operator said it was taking presale orders from Dec. 7 to 21 on its Web site, and the robot will hit the market two days before Christmas Eve.

Co-developed by KT and Iriver, the Kibot 2 features an enhanced combination of educational and entertainment content.

From the Kibot, parents can access the Kids Shop content store, which features 10,000 videos on demand, including Pororo the Little Penguin, Cloud Bread and lectures to prepare kids for the National English Ability Test.

For entertainment, the Kibot 2 has a virtual reality game called “Touch Touch English.” A camera on the robot photographs the child, whose image appears on its 7-inch screen, and then teaches the child English through games.

The Kibot 2 has a projector on the back of its head to shoot images on a wall or screen. It comes with an HDMI cable that connects it with a TV for larger images.

The Kibot 2 can also play the role of guardian when the parents are away. Its camera monitors the children and it can be controlled remotely by the parents.