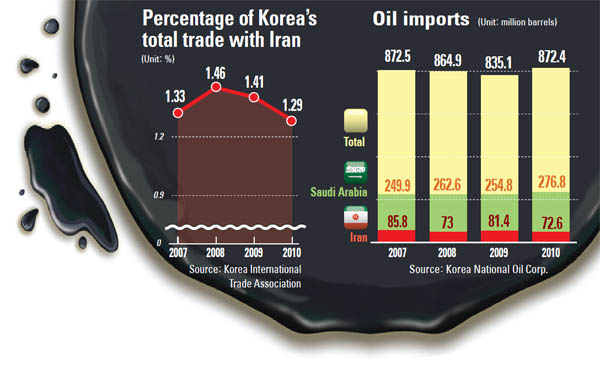 Responding to calls from the United States for Korea to apply tougher sanctions against Iran, the government yesterday added more than 100 Iranian groups and individuals to its financial blacklist.

“We added 99 groups and six individuals linked with Iran to our financial sanction list,” said Eun Sung-soo, head of the Ministry of Strategy and Finance’s international finance bureau, yesterday. The ministry, however, didn’t mention which groups would be sanctioned.

With the stricter measure, the organizations and individuals will now have to receive approval from the Bank of Korea before making any foreign currency transactions. 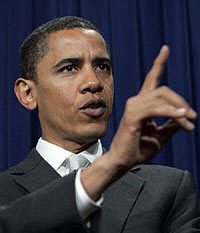 With the lengthened sanctions list, Korea now restricts financial transactions with 201 organizations and 30 personnel that are suspected to be linked to Iran’s nuclear program.

Last year, Korea, the world’s fifth-largest crude oil importer, barred 102 organizations and 24 individuals related to the Middle Eastern country including the Iranian Revolutionary Guard Corps, the Islamic Republic of Iran Shipping Lines and Bank Mellat from financial transactions. The decision back then was based on the resolution adopted by the United Nations Security Council in September, last year, to slow down Iran’s nuclear program.

Yesterday’s fresh sanctions come after legislation was passed by the House of Representatives and the Senate in Washington this week, which applied sanctions on Iran’s Central Bank as part of efforts to slow Iran’s nuclear program. The legislation forces countries to close the accounts or risk being cut off from the U.S. financial system. Korea as well as other Asian and European countries import petroleum from Iran through the Iranian Central Bank and the new bill could affect Korean crude oil imports.

The U.S. has been requesting Korea to join in toughening sanctions against Iran. Washington initially announced a series of sanction measures on Iran on Nov. 21 based on an International Atomic Energy Agency report suspecting Iran of continued nuclear weapons development. Iran, however, says its nuclear program is for “peaceful purposes.”

Robert Einhorn, the U.S. State Department’s special adviser for nonproliferation and arms control, even reportedly met with a senior finance ministry official during his recent visit to Seoul, asking Korea to join the sanctions.

Pressure from the U.S. has caused a dilemma for the Korean government as of late as Korea imports a large amount of oil from Iran and imposing sanctions would mean local businesses will suffer. This is why the sanctions that were announced yesterday are regarded as being lighter than expected as the government fears disruptions in importing crude oil from Iran.

According to the Korea International Trade Association, Korea imported up to $10.87 billion worth of oil and other related products from Iran between October last year and October this year.

However, concerns still remain. For Korean firms to have financial transactions with the U.S., they are required to halt providing services and product supplies related to petrochemical resource development in Iran.

However, concerns still remain. For Korean firms to have financial transactions with the U.S., they are required to halt providing services and product supplies related to petrochemical resource development in Iran.

Also, the legislation passed by the U.S. House and Senate includes halting financial transactions with countries that deal with Iran’s Central Bank.

As for Korea, the Industrial Bank of Korea and Woori Bank have been dealing with the Middle Eastern bank in settling crude oil payments in won. Around 10 percent of Korea’s annual crude oil comes from Iran.

According to sources, as part of efforts to minimize the impact on local businesses Korea is currently in talks with the U.S. to mitigate the sanctions, such as having an exemption that allows crude imports via Korean won-denominated payments.

The Ministry of Foreign Affairs and Trade also said yesterday that it will inform local companies doing business with the U.S. about the contents of additional sanctions so that they can minimize the possible impact on their businesses.

The ministry, however, does not see that the additional sanctions as having a significant impact on the Korean economy.