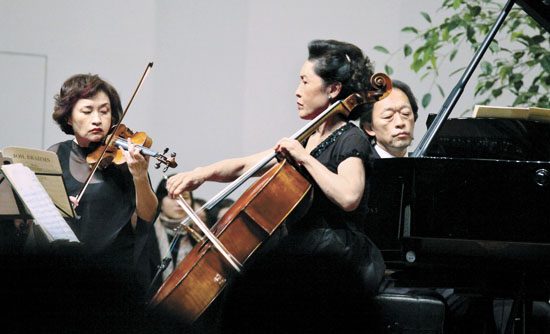 The Chung Trio performs at the main auditorium of Ewha Womans University on Tuesday. From left, Chung Kyung-hwa, Myung-wha and Myung-whun. Provided by the university


Applause filled the main auditorium at Ewha Womans University when violinist Chung Kyung-wha, 63, and pianist Chung Myung-whun, 58, appeared wearing black on Tuesday morning. The sound of Kyung-hwa’s violin broke the silence and it was followed by the piano.

Cellist Chung Myung-wha, 67, Kyung-wha and Myung-whun held a concert as a tribute to their late mother Lee Won-suk who passed away in May. It has been seven years since the Chung Trio performed on an official stage. In 2004, they performed together for Lee’s 85th birthday.

In a booklet for the concert, they wrote, “We were having deep thoughts about what to write on our mother’s tombstone and we decided to write ‘Visionary Mother of Love and Faith.’?”

“We were given the kind of love that was full of respect,” they also wrote.

The concert, which was titled “For our mother” started with “Bach Aria in G.” The tone of the music was soft but Kyung-wha’s face showed some tension.

After performing Mozart’s Violin Sonata No. 21, Kyung-wha left the stage to applause.

“Mozart’s Sonata is in a minor key,” Kyung-wha said. “Mozart composed the music as a tribute to his mother after she passed away.”

The auditorium is also a place of memory for the Chung siblings. “Our mother was blessed with music when she was attending Ewha Womans University and here she prepared our life of music,” Myung-hwa said. “Here at Ewha, where we have our fondest memories, we are very happy to perform again.”

Lee was a dedicated mother to her children. There is a famous tale that Lee greased door hinges at the auditorium because she was worried that the noise from wooden doors would interrupt the concert by Kyung-wha and Myung-whun.

For the finale, the Chung Trio performed Brahms Piano Trio No. 1.

“It was her favorite piece,” Myung-wha said.

After the performance ended, the 2,800 people who filled the auditorium applauded loudly.

The Chung Trio held hands and paid their gratitude on stage. Their music was the best dedication they could give to the mother who raised them.