Foreigners form council to have their voices heard

Foreigners form council to have their voices heard 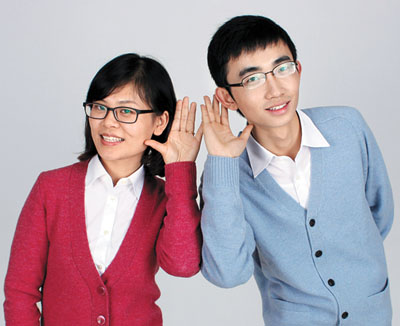 Wun He from China (left) and Sun Zhiwei from Mongolia. [YONHAP]

“Foreign students often face language barriers although they study hard,” said He. “I decided to run to reduce the difficulties that international students go through.” Meanwhile, a 22-year-old student from Inner Mongolia, Sun Zhiwei, majoring in hotel management, was elected as vice president.

“I want to increase the scholarship funds for foreign students,” said He. “The burden for tuition fees is quite high, considering the money required to stay here.”

He, who came to Korea in 2008, enjoys listening to Korean music from singers such as HOT and Shinwha. She kept Korea in mind even after attending Qingdao University, studying international trade.

“I dreamed of becoming a student in a Korean university after seeing dramas like ‘I’m Sorry, I Love You,’?” stated He.

However, her life in Korea was completely different from what she saw in the dramas. “It was very lonely dealing with all my problems by myself,” she said. So she decided to form an independent student organization to help lonely foreign students connect with Korean students. He began preparing for the election in September, after having gathered 20 foreign students. Her first priority was to find out what foreign students needed. The election campaign members held discussions and asked their friends about their daily issues. “Many foreign students find that the cafeteria food does not suit their taste, and they wander around the school during meal times,” she said. “So I made a promise to change the cafeteria food.”

She also promised to make a tutoring program with Korean students for those who are not familiar with Korean, as well as a policy to improve the scholarship program.

During the election, that lasted three days, He was elected with a 96 percent approval rating from a voting turnout of 54 percent. “About 800 people voted for us,” said He. “It will be more effective for us to represent foreign students’ voices to the school.”

Kyung Hee University has about 2,500 foreign students from 60 countries, the highest number of foreign students at a Korean university. The number of international students in Korea skyrocketed over the past seven years by more than five times from 16,832 in 2004 to 89,537 this year.

“I could not do anything when I first enrolled into school because I did not have enough information when registering for classes,” said Jiang Jie, a 25-year-old senior Chinese student majoring in hotel management. “I hope that the difficulties and inconveniences will decrease with the foreign student council.”