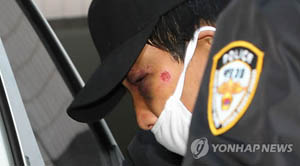 The Coast Guard said Thursday evening that it detained for further investigation the Chinese fishing boat captain accused of murdering a Korean law enforcement officer earlier in the week.

Authorities said the Incheon District Court issued a detention warrant for the captain, who has been in custody since Monday.

The identity of the 46-year-old fisherman has not been revealed, but he is suspected of killing Korean Coast Guard SWAT team member Lee Cheong-ho with a knife and seriously wounding a second officer.

In addition to the Chinese captain, who denied he had anything to do with the killing, eight crew members of the fishing boat were arrested for obstruction of government officials’ execution of duty.

Investigators said that they had secured incriminating testimony from Chinese crew members supporting their case.

The Chinese captain is also charged with obstruction of justice and will be tried in a Korean court.

The head of the country’s Coast Guard, meanwhile, said changes would be made to operational manuals regarding the use of firearms, so frontline officers can use their weapons more readily in case of danger. Commissioner General Mo Kang-in told lawmakers that use of firearms may be necessary if people resist arrest using weapons. He added that the number of Coast Guard cutters stationed in the Yellow Sea should be increased from six to nine to cope with recent increases in illegal fishing within the country’s EEZ.

The Ministry for Food, Agriculture, Forestry and Fisheries also said that it planned to add four more 1,500-ton vessels by 2015 to help stop illegal fishing by Chinese boats.

While Korea Coast Guard currently operates 274 vessels to prevent illegal fishing boats, the Fisheries Supervision Office under the ministry - which is also in charge of patrolling and monitoring foreign fishing vessels - only has 34 vessels at its disposal for stopping foreign fishing boats from trespassing into Korea’s fishing zones. Among the 34 vessels, only 6 are over 1,000 tons, the ministry said.