Foreigners make up 3% of country

Foreigners make up 3% of country 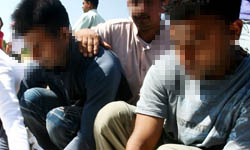 The number of foreign residents living in Korea reached an all-time high this year, accounting for 3 percent of the country’s total population, with Chinese residents forming the largest group, government data showed yesterday.

According to statistics compiled by the Ministry of Justice, 1.41 million foreign nationals were living in Korea as of September this year, up 13 percent from the end of last year.

Although international migrations to Korea decreased in 2009 for the first time since Seoul began monitoring them in 2000 mainly because of the worldwide economic slump, the trend reversed last year in line with the country’s economic recovery, the ministry said.

Migrant workers comprised the largest group of all foreign nationals, accounting for 42.5 percent, the data showed. Around 9 percent of them were illegal workers, the ministry found.

By nationality, Chinese ranked first with 53.1 percent, followed by Vietnamese with 11 percent, Filipinos with 5 percent and Indonesians with 4.77 percent, according to the data.

Immigrants married to Koreans formed the second-largest group of foreign residents here, taking up 10.1 percent of the total international population in the country. Chinese ranked first, totaling 45.4 percent of all spouses, followed by Vietnamese with 25.35 percent and Japanese with 7.64 percent, according to the data. Foreign wives accounted for nearly 90 percent of the total marriage immigrants, it showed.

The third-largest group of foreign nationals here were students who came to Korea to study. Among the total 93,232 international students, 20 percent were studying the Korean language, according to the statistics. Chinese, again, turned out to be the largest group among international students here with 72.9 percent, followed by Mongolians with 5.25 percent, Vietnamese with 3.47 percent, Japanese with 2.61 percent and Americans with 1.32 percent, the data showed.

“The inflow of foreigners is expected to continue further on the back of the country’s economic development and low birthrate,” Kwak Jae-seok of Migration & Diaspora Research Institute said.