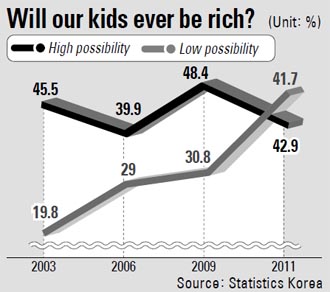 A 42-year-old housewife in Gunpo, Gyeonggi, who lives in a leased apartment with a jeonse rental deposit, received a devastating phone call from her landlord. He asked her to switch from the jeonse system to paying a monthly rent.

Two years ago when Mrs. Lee’s husband lost his job, they had to sell their house and move to the apartment after paying the jeonse deposit.

Lee said the deposit “is the only sizable sum of money” the couple has and she’s worried it will disappear through monthly rent payments.

Lee’s also worried because she hasn’t been able to afford to send her two children to hagwon, or private tutoring schools, for the past three months. 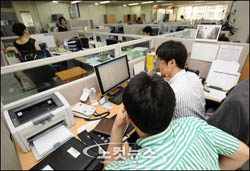 “It hurts me most when I think that my children may fall behind at school because of their parents’ financial status,” said Lee.

Lee is part of a growing middle class that’s surrendering their hopes of ascending to the upper class - and also doubting that their children will ever get there.

Statistics Korea released its latest social survey results on Wednesday showing that middle class Koreans are losing confidence that they will improve their current financial status. About 38,000 people over the age of 13 were surveyed for Statistics Korea’s 2011 social survey.

According to the study, 52.8 percent of the respondents said they belong to “the middle class,” which is the lowest figure since Statistics Korea began conducting the social survey in 1988. Compared to the previous result two years ago, there was a 2.1 percent decline.

Only 35 percent of the respondents over the age of 65 said they belong to the middle class.

Meanwhile, 43.3 percent of the respondents said they belong to the “lower class,” which is an increase from 42.2 percent in 2009.

Despite an actual increase in earnings during the period, fear of unstable employment makes people feel that they’re slipping, analysts say, even when they technically are not.

“As uncertainty over becoming unemployed grows, the standard of defining the middle class has changed,” said Professor Chang Se-hoon from the Department of Sociology at Dong-A University. “People now define being in the middle class as having a financial status that isn’t threatened with crisis.”

In 2006, Chang said, people defined the middle class as those who earn 5 million won ($4,315) a month and have assets of over 1 billion won, according to research done by Korean Sociological Association. “After going through financial crises,” he said, “the standard probably has gone up.”

In the social survey, only 28.8 percent of respondents said there was a high possibility that their social position or financial status will improve.

Moreover, according to the statistics, only 41.7 percent of the respondents believe “there is a chance that their children will ascend to the upper class.”

On the other hand, 42.9 percent of respondents said “there’s a low chance that their children will ascend to the upper class.”

This is the first time the negative response was more popular than the positive since Statistics Korea began conducting social surveys.

“Even the principle of equal opportunity in the U.S. that people defined as the ‘American dream’ collapsed with the financial crisis,” said Kim.

“Private education, which once acted as a catalyst to climbing the social class ladder,” said Professor Chang from Dong-A University, “has now become an obstacle to upward mobility because it’s too expensive for many middle class people to afford.