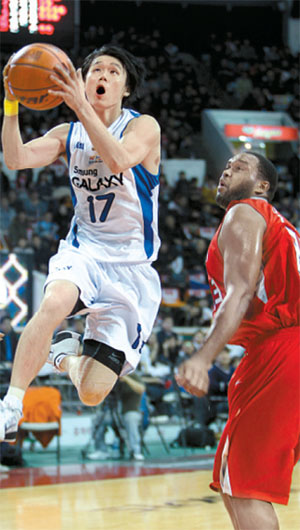 The Seoul Samsung Thunders finally ended their franchise-record losing streak in the Korean Basketball League on Saturday, thanks to the impressive performance of guard Lee Si-jun.

At the Jamsil Student Gymnasium in Seoul, the Thunders beat their city rival Seoul SK Knights 83-76 in overtime, putting an end to their 14-game skid. It was the Thunders’ first win since Nov. 11.

American Joe Ira Clark put up 28 points, and forward Lee Seung-joon dominated the boards with 29 rebounds, but Lee Si-jun stole the spotlight with a career-high 27 points, including four 3-pointers, and five assists.

The 28-year-old guard came through when the team needed it most. Trailing 66-68 in the fourth quarter with three seconds remaining in regulation, Lee hit a critical jumper to force the game into overtime. Lee didn’t let up then. He penetrated the Knights defense with slick moves, driving inside and getting to the line.

For the Thunders, Saturday’s victory showed how a solid performance in the back court can change their game around.

Earlier this season, the Thunders lost point guard Lee Jung-suk to a knee injury, and Lee Si-jun was tapped to replace him. But the task was difficult for the 180-centimeter (5-foot 11-inch) guard, as he failed to impress and the Thunders began to fall apart.

“I had lot of pressure when Jung-suk was ruled out due to his unexpected injury,” Lee said. “As I became hasty, I made turnovers and felt so sorry for my teammates and coach.”

But on Saturday, Lee showed a different playing style. With veteran point guard Kim Seung-hyun taking the leading role in the back court, Lee was able to focus on scoring and active plays, more like a shooting guard.

“As Seung-hyun controls the game, I said to myself that I should just carry out the role that I’m good at,” Lee said. “I think my pressure is lessened because of Kim.”

Kim, 33, said he is happy to end the team’s losing streak and praised Lee’s contribution. Kim, who returned to the court on Dec. 7 after 641 days of suspension due to a salary dispute with his former team, had eight points with four assists.

“I could make a shot comfortably because Si-jun created open chances for me,” Kim said. “I’m happy that now players know how to play like a winner.”

Until Saturday, the Thunders were trying desperately to turn their season around, working hard to halt their historic skid. The team even had a group therapy session to build up their trust and confidence in the roster.

Although, the team sits in last place in the KBL with five wins and 22 losses, Thunders coach Kim Sang-jun said their fifth victory will be a stepping stone to leap forward.

“I did win the college championships, but I have never been happier,” Kim said after Saturday’s game. “I’m sure players have gained confidence from today’s victory.”