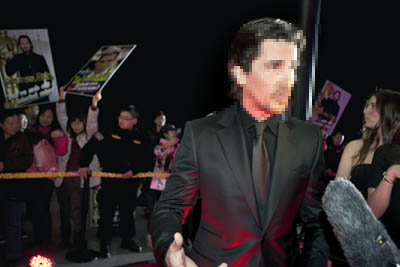 BEIJING - “Batman’’ star Christian Bale, in the midst of promoting a film he made in China that some critics have called propaganda, was physically stopped by government-backed guards from visiting a blind activist living under house arrest - with a CNN crew in tow to record the scuffle.

CNN posted footage of the confrontation on its Web site Friday.

The run-in and publicity is likely to cause discomfort in China’s government-backed film industry, which hopes Bale’s movie “The Flowers of War’’ will be a creative success at home and abroad. The star’s actions are sure to focus attention on the plight of Chen Guangcheng, guarded around the clock by burly, aggressive security men who have blocked dozens of reporters and fellow activists trying to see him in the past.

Bale was to leave China on Friday and his representatives could not immediately be reached for comment.

Bale, who won a best supporting actor Oscar for last year’s “The Fighter,’’ traveled Thursday with a crew from CNN to the village in eastern China where Chen, the blind lawyer, lives with his family in complete isolation.

They were stopped at the entrance to Dongshigu Village in Shandong Province by unidentified men.

The video footage shows Bale asking to see Chen, with a CNN producer providing interpretation, but being ordered by one of the guards to leave. He then asked why he was unable to pass through. The guards responded by trying to grab or punch a small video camera Bale was carrying.

“What I really wanted to do was to meet the man, shake his hand and say what an inspiration he is,’’ Bale was quoted as saying by CNN.

Chen’s case has been raised publicly by U.S. lawmakers and diplomats, including Secretary of State Hillary Rodham Clinton, all to no response from China.

CNN said Bale first learned of Chen from news reports when he was in China filming “The Flowers of War,’’ China’s official submission this year for best foreign language film Oscar.