Portman, fiance in France with baby

Portman, fiance in France with baby 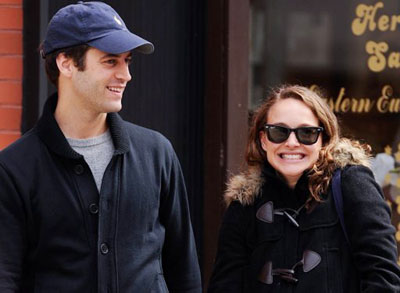 Oscar-winner Natalie Portman was in France last week with her baby boy and star choreographer fiance Benjamin Millepied, who has a double-bill showing in the eastern city Lyon.

The U.S. actress and French dancer met on the set of the ballet-themed 2010 thriller “Black Swan,” which earned the 30-year-old Portman a best actress Oscar for her role as a ballerina driven close to madness by her quest for perfection.

Millepied shot to mainstream fame as the film’s choreographer, but was until recently principal dancer with the New York City Ballet, a position he just left to join Portman and their six-month-old son Aleph in California.

The 34-year-old dancer, who studied in Lyon, returns there from Dec. 17 to 23 with two of his creations, shown in a joint program with the “Concerto Barocco” by the late Russian-American master George Balanchine.

“Sarabande,” a 2009 work set to a score by Johann Sebastian Bach, is a lively, timeless work, while “This Part in Darkness,” created this year and working in live video and minimalist music by David Lang, has a darker, contemporary feel.

“Very often my ideas come from music. Music dictates the direction I take, which can lead to quite varied results,” Millepied told AFP in an interview ahead of Saturday’s opening show.

Born to a dance teacher mother, Millepied grew up between Senegal and France and says he was shaped by the twin influences, the “rigidity of classical dance and the freedom of African dance” as well as jazz and contemporary music.