Djokovic says belief is key to repeating this year’s success

Djokovic says belief is key to repeating this year’s success 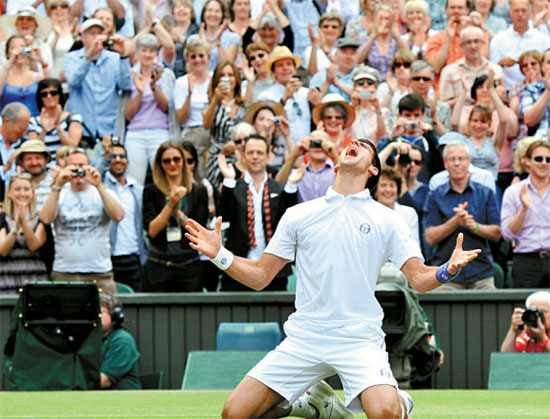 Novak Djokovic reacts after beating French player Jo-Wilfried Tsonga during their semifinal at the Wimbledon tennis championships at the All-England Tennis Club in southwest London on July 1. [AFP/YONHAP]


ABU DHABI, United Arab Emirates - After winning three Grand Slams, seven other titles and claiming the No. 1 ranking, Novak Djokovic briefly abandoned his strict diet to toast a season of triumph with a glass of wine.

“More than one, actually,’’ a smiling Djokovic said Saturday. “It did not end up well the next day, but I did not have a practice so it was a good excuse.’’

Djokovic went 70-6 for the season, with two of those losses coming through retirement. The 24-year-old Serb beat Rafael Nadal in six finals on his way to replacing the Spaniard as No. 1. He ended the season with a record $12.6 million in prize money.

After a celebratory bash and a two-week break from tennis, Djokovic has set his sights on doing it all again next year.

“Why not? I think it does not make sense to be anything else than optimistic,’’ Djokovic told reporters in the United Arab Emirates ahead of an exhibition tournament in Abu Dhabi beginning Dec. 29.

“I need to believe in my qualities, in my abilities. I need to believe I can repeat this year again. Of course it’s going to be an incredible and a difficult task to achieve, but you never know. Nothing is really impossible.’’

Not surprisingly, Djokovic said he wouldn’t be changing his preparations, which last year included the introduction of a gluten-free diet which he partly credits for his stunning improvement.

“I am sticking with the same regime, and my diet and the same way of practicing,’’ Djokovic said. “Nothing has changed.’’

Djokovic had won only one Grand Slam title heading into 2011. For the previous couple of years, the Serb had been firmly entrenched behind the established top two of Rafael Nadal and Roger Federer.

Although he was consistently going deep at the majors, Djokovic’s lone big title came at the 2008 Australian Open.

He had also retired from a series of matches with fitness problems.

The turnaround in 2011 was dramatic and left everyone guessing just how he did it. Djokovic said the biggest change was in his head.

“You cannot just have mental strength at the start of your career,’’ Djokovic said. “You have to develop, You have to work. You have to be patient.

“It took me four, five years in a professional circuit to really understand myself, to perfect my game as much as possible, and to be mentally experienced and confident enough that I can win major titles.’’

He is not the finished article yet though.

“There’s still room for improvement,’’ Djokovic said, adding that his focus over the next years will be on winning more Grand Slams.

“That’s something that I am aiming for. The game that I have is good enough to be one of the best on all surfaces, so I just need to maintain that level and always improve certain strokes in my game by certain percentage.’’

Djokovic will begin his preparations for the new season at the two-day exhibition tournament in Abu Dhabi, alongside Nadal and Federer.

He will play Gael Monfils of France in the opening match on Dec. 29.