Gov’t stumbles in bid to trim electricity use

Gov’t stumbles in bid to trim electricity use 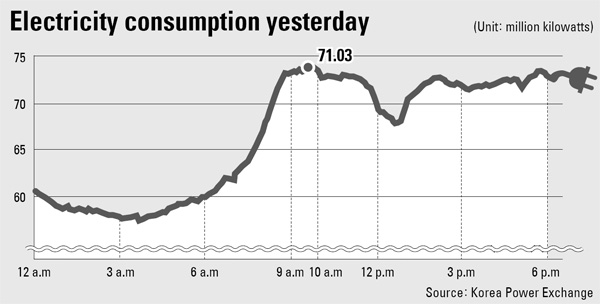 The government’s plan to cut electricity use across the nation by ordering major plants and buildings to scale back their usage by 10 percent during peak hours seems to have hit a new roadblock.

Less than one week after Seoul implemented the measure during the hours of 10:30 a.m. and 12 p.m., and 5 and 7 p.m., when usage was formerly at its highest, consumption patterns have changed, the Korea Power Exchange (KPX) said yesterday.

Industry analysts assume that industrial consumers have sidestepped the new regulation by increasing their usage outside the sanctioned times.

The power exchange also believes people have begun turning up their heaters shortly before 10 a.m., and again before 5 p.m., to avoid the penalties of up to 3 million won ($2,560).

Yesterday’s electricity use peaked at 71.03 million kilowatts on average between 9 and 10 a.m., the KPX said. This is a drastic increase from a year ago when it peaked at 66.38 kilowatts between 5 and 6 p.m. on Dec. 20, 2010. However, this still left the nation’s key reserve at 6.88 million kilowatts, higher than the minimum of 4 million kilowatts that is considered safe, it added, as it moved to play down fears of another power outage like the one that shook the country in September.

The country’s overall electricity consumption in November grew 2.1 percent to 36.88 billion kilowatt-hours from a year ago, fuelled by rise in industrial use, a government report said.

This marked the 30th straight month of growth in this area, in annualized terms, according to the Ministry of Knowledge Economy. Industrial power sales serve as a barometer of industrial activity as companies use more electricity when business is good and cut back to cope with drops in demand.

However, growth slowed significantly in November from October in monthly terms, the ministry added.

“This is because electricity consumption by most industrial sectors only grew narrowly despite strong growth of exports, which gained 13.8 percent on-year last month,” it said in a press release.

Electricity consumption by the chemical industry and oil refineries surged 16.7 percent and 13.5 percent last month, respectively, while the steel and textile industries only gained 6 percent and 1.9 percent.

The industrial sector accounted for about 57 percent of total electricity consumption in November. Consumption by households rose 1.6 percent from the same period last year.