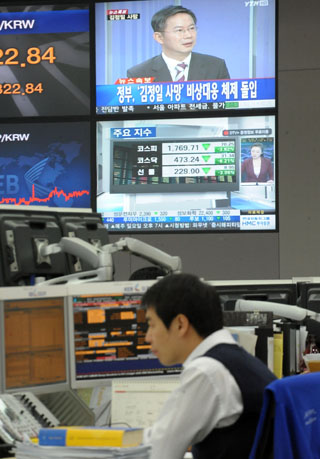 A trader tracks screens showing plummeting stock prices on the trading floors of the Korea Exchange Bank headquarters in Jung District, central Seoul yesterday. The benchmark Kospi nosedived on the news of Kim Jong-il’s death before rebounding slightly later in the day. [YONHAP]

With the news of Kim Jong-il’s death having caught the world off-guard, domestic and overseas financial markets reacted negatively as the increased geopolitical risk of North Korea’s possible destabilization compounded the impact of the euro zone debt crisis.

The local bourse and the value of the won plunged as the news hit the airwaves at noon before recovering somewhat when the market closed, while several foreign stock indexes and currencies fell, excluding the U.S. dollar.

As global credit ratings agencies kept an unchanged view on South Korea’s economic fundamentals, analysts underlined the precarious position of Kim Jong-un’s succession compared to his father’s rise to power when Kim Il Sung died in 1994. Such jitters were reflected yesterday when the benchmark index showed greater movement than in 1994.

Experts said that internal uncertainty within the Communist regime, sparked by the unexpected death of its leader of 17 years, is likely to adversely affect financial markets for a while, unlike the short-term shock of previous North Korean issues.

Reflecting such concerns, government authorities and financial organizations including the Ministry of Strategy and Finance, the Bank of Korea and the Financial Services Commission began emergency operations, such as round-the-clock monitoring of financial markets, a crackdown on unfounded rumors and the bolstering of security around important facilities.

Yesterday morning the local bourse had been like any other in recent memory, until the news of Kim Jong-il’s death hit out of the blue at noon.

The benchmark Kospi had been seeing a steady decline below 1,800 points since opening at 1,829.49 due to possible news of an additional batch of European sovereign rating downgrades, but starting from noon the primary index immediately nosedived by some 89.36 points, or 4.86 percent, to bottom out at 1,750.60 at 12:05 p.m. as shocked investors unloaded stocks.

The foreign exchange market lurched as well, with the won also plunging nearly 30 won against the greenback to reach 1,185.

However, both the primary index and the value of the won had rebounded somewhat by market close due to brisk buying from retail and institutional investors in the case of the former.

The Kospi closed at 1,776.93 points yesterday, or a 3.43 percent drop from last Friday’s close, while the won-dollar exchange rate fell to 1,174.8 won - with only stocks in the defense sector or manufacturers of daily necessities rising.

The value of the won dropped to 16.2 won against the dollar, its lowest level since Oct. 7, compared to last Friday’s close.

With geopolitical risk suddenly dialed up, foreign investors beat a retreat from the Kospi, selling some 206.3 billion won worth of shares yesterday - but retail and institutional investors snapped up the difference by buying some 164.8 billion won and 102.6 billion won in shares respectively.

“Foreign investors began selling stocks but buying futures after the news of Kim’s death,” said Lee Joong-ho, analyst with Tong Yang Securities. “This has been an established trend with foreign investors whenever a geopolitical risk emerged.”

The yen dropped against the dollar for the first time in three days, falling 0.2 percent to 77.88 yen.

Global credit rating agencies and local analysts agreed that, while the sudden escalation of geopolitical risk emanating from the North does not change the South’s economic fundamentals, financial markets are expected to be rattled by increased volatility in the short-term.

“Fitch does not view Kim Jong-il’s death as a trigger for negative action on South Korea sovereign ratings in itself,” the credit ratings agency said in a statement, noting that it had already factored in geopolitical risk when assigning a positive outlook to South Korea’s A+ rating in November.

“We do not see much immediate impact on the economy of South Korea while political uncertainties are rising in the North,” added Goldman Sachs in a statement. “First, the poor health of the leader has been well known, [and] second, economic linkages between South and North Korea are very limited with little contagion from a possible regime change in North Korea.”

However, like Moody’s Investor Service, which denied there would be any immediate impact on South Korea’s sovereign rating, Fitch left open a possible change of mind should the situation deteriorate, adding that it will “keep the situation under close review.”

Analysts said that past instances of North Korean risk failed to rock Korean financial markets for long, noting the likelihood that a similar rebound might materialize this time around.

“Under routine instances of increased North Korean risk, the stock market often rebounded quickly,” said Lee Sang-won, an economist at Hyundai Securities. “When Kim Il Sung died [in 1994], there was barely any reaction from the stock market.”

However, many analysts said that the shaky succession of Kim Jong-un to the head of the North Korean regime is likely to cause long-term uncertainty in local financial markets. This is because, unlike 1994, the current state of North Korea’s political leadership is anything but consolidated.

“Korea had not yet opened its financial markets in 1994, and foreign investors did not take up as much of the market as they do now,” said Hong Soon-pyo, chief economist at Daishin Securities.

“Moreover, uncertainty surrounding North Korea’s internal power structure is higher. Rather than an aggressive buying position, we recommend making short-term transactions centered around stocks that have fallen the furthest.”

“We have put a lot of thought into being prepared for emergencies such as this,” said Bank of Korea Governor Kim Choong-soo yesterday.

Meanwhile, the FSC outlined the necessity for “significant countermeasures for the stability of financial markets,” according to Chairman Kim Seok-dong. The FSS said that it will work to block all “unfounded and vicious rumors” that could throw financial markets into confusion.