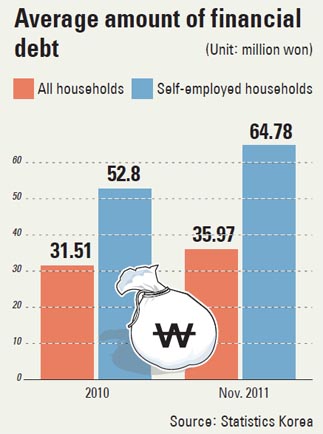 In the third quarter of this year, the branch dealt with a daily average of more than 1,700 people visiting, calling or leaving messages online seeking advice on debt workouts. Many of the citizens awaiting counseling were self-employed - owners of small businesses such as restaurants or corner stores looking for guidance on debt restructuring from the nonprofit organization.

“I am more than 100 million won [$86,300] in debt,” said one such small business owner in his 50s surnamed Kim. He said he started a Korean barbecue restaurant after retiring from a large conglomerate last year but saw a big dent in his profits when several similar restaurants sprung up in the immediate vicinity.

“I can’t even afford to meet the interest payments as my monthly earnings have fallen below one million won,” he lamented.

Small business loans for the self-employed are increasingly looking like a powder keg about to blow Korea’s snowballing household debt problem wide open.

The amount of debt that small business owners have amassed with the nation’s five largest banking operations exceeded 100 trillion won this year, as more baby boomer retirees rushed to start their own businesses and many others saw their profits drop.

As small business owners are held personally responsible for defaulting, experts fear that these “hidden household loans” could trigger a credit crisis if next year’s economic downturn materializes as expected.

Outstanding loans to the self-employed from Korea’s five largest banking operations jumped 10.8 percent from 92.8 trillion won for the whole of 2010 to 102.8 trillion won for the first 11 months of this year, according to data provided by Kookmin Bank, Shinhan Bank, Hana Bank, Woori Bank and Nonghyup. The data was compiled by Yonhap News Agency yesterday.

Officials have already expressed concern about the rapid rise of household loans, which increased by 4.2 percent during the first three quarters of 2011. Even more alarming, however, is the growth in loans taken out for self-employed businesses this year, as this more than doubles the rate of household loans over the same period.

As this means the owner’s personal assets could be liquidated to pay off the loan, some experts are equating money lent out to the self-employed to “hidden household loans.” These could end up compounding household loans to dangerously high levels. Household loans stood at 892.5 trillion won as of the end of September and are expected to exceed 1,000 trillion won for the whole year.

Additionally, loans for the self-employed are designed to sour more quickly compared to mortgages and other household loans.

Households could theoretically cut their spending to pay off mortgages, but self-employed businesses that are seeing their revenues shrink have little recourse in paying off the principal. Loans for the self-employed also have to deal with interest rates that are about 1 percentage point higher than mortgages.

“Signs of a slump in domestic demand have been increasing lately. We fear the default rate of loans for the self-employed will rise as well,” said Jeong Young-sik, a research fellow at Samsung Economic Research Institute.