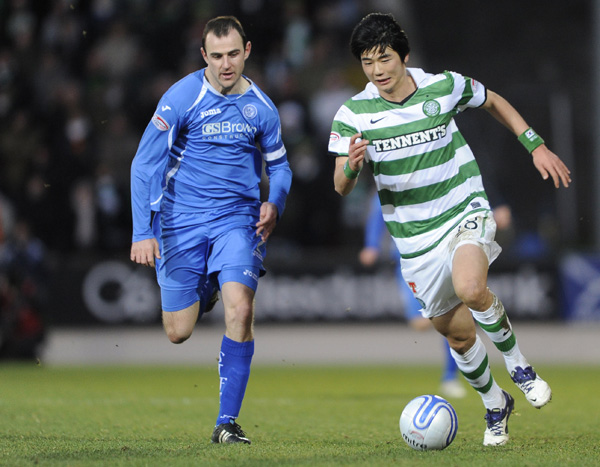 GLASGOW - Korean midfielder Ki Sung-yueng helped Celtic keep the pressure on Scottish Premier League leaders Rangers with a goal in the 2-0 win over St Johnstone at McDiarmid Park on Sunday.

Neil Lennon’s side kicked off seven points behind Rangers after their Glasgow rivals’ late win over Inverness on Saturday.

But two goals in four minutes from Gary Hooper and Korean midfielder Ki midway through the second half ensured that gap was reduced to four points.

Hooper broke St Johnstone’s stubborn resistance on the hour and Ki sealed the points moments later with his first goal in nine matches.

The only downside for Lennon was the loss of Swedish defender Daniel Majstorovic, who had to go off in the first half with a suspected fractured cheek bone and eye socket after a clash of heads with Saints midfielder David Robertson.

Saints boss Steve Lomas was critical of Majstorovic’s challenge, even though the Celtic star came off worse, when he said “Maybe you don’t get those decisions against Celtic.”

But Lennon added: “The Majstorovic challenge was a perfectly good full-blooded challenge from a center-half who only had eyes for the ball and he ended up worse off for his own bravery.

“There was nothing wrong with the challenge at all. It is a big blow because he has been immense for us.”

All eyes were on Celtic’s traveling supporters following the latest controversy involving a minority of the Parkhead faithful.

Celtic will find out on Monday if they are to face any action from UEFA after a flare was thrown from the section holding their fans before Thursday’s Europa League game against Udinese at the Stadio Friuli.

A banner which was insulting towards European football’s governing body was also unfurled, which led to condemnation from Lennon, chief executive Peter Lawwell and chairman Ian Bankier.

However, there appeared to be nothing untoward coming from the away support who watched their side struggle in the early stages.

They finally threatened when Georgios Samaras drew a fine save from Peter Enckelman with long-range strike.

Saints defender David McCracken was relieved to see his attempted headed clearance from Cha Du-ri’s cross loop over his own goal for a corner.

Then Celtic striker Hooper missed a great chance to open the scoring. He latched onto a pass by Cha inside the penalty area and dummied Enckelman but the goalkeeper somehow got his hand to the shot to push it past the post.

St Johnstone started the second half strongly and within a minute skipper Dave Mackay cut inside his Celtic counterpart Scott Brown and drove in a left-footed shot which Fraser Forster saved down low at his left-hand post.

But Enckelman had to make another great save from Hooper in the 57th minute and Celtic’s increased pressure was rewarded in the 60th minute.

Saints failed to clear a Charlie Mulgrew corner and Hooper squeezed his shot home from close-range.

And Celtic doubled their lead four minutes later with a breakaway Ki goal after a flowing move involving Cha and Samaras ended with the 22-year-old Korean slamming in from close range.

It was Ki’s fifth goal of the SPL season. He also scored one goal in the Europa League. AFP