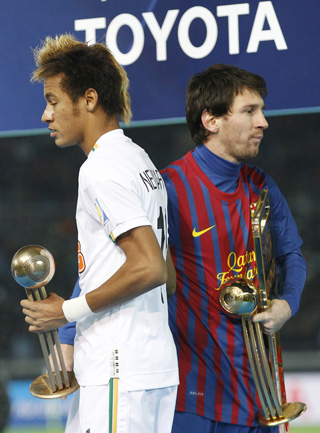 Lionel Messi, right, and Neymar, walk past each other during the awarding ceremony in the final of the Club World Cup in Yokohama, Japan, Sunday. [AP/YONHAP]

YOKOHAMA, Japan - The Club World Cup final between Barcelona and Santos was billed as a showdown between Lionel Messi and Neymar, but the Argentine wizard put the young upstart firmly in his place.

Messi, widely acknowledged as the best player in the world, bagged an exquisite brace as the European champions strolled to a 4-0 victory in Japan to claim the annual intercontinental crown for a second time in three years.

In contrast the young Brazilian, who at 19 is five years Messi’s junior, suffered a wretched evening, making a hash of a header that would have given his side a glimmer of hope and failing to score when through on goal.

“Barcelona are far above Santos. I have nothing to say,” said the disgruntled teenage talisman after Santos were well beaten by a superior Barcelona. “I must accept the result. It was a great lesson for me.”

Messi was as delighted as his younger opponent was disappointed.

“We set out to be the world’s number ones and I’m rejoicing in this title with my teammates,” he said after Sunday’s triumph.

“I’m happy as I scored, just like I did at our last Club World Cup final against Estudiantes [in 2009 when Barcelona won in extra-time]. I’m more happy about the fact that we played well as a team.”

Muricy Ramalho, the Santos coach, said there was no doubt who the best player in the world was - but that would change.

“Messi is the best, there’s no question about that,” he said, when asked by AFP whether Messi’s performance, which included a cheeky backheel on the way to one of the goals, proved the diminutive Argentine was unrivalled.

“He’s been building up to be the best player for many years, but Neymar is improving and in the future he will be the best.”

Neymar, who has been linked with a big-money move to Europe, with Barcelona and rivals Real Madrid among the many clubs casting envious glances, showed only glimpses of the talent that has made him hot property.

A packed house at the 70,000 International Stadium in Yokohama cheered every time he and Messi touched the ball.

Neymar had the crowd gasping midway through the second-half when he bamboozled the Barca defense with one touch.

But his finishing - unlike Messi’s - was wayward and he squandered two good chances in the second period.

First, he got away from Barcelona captain Carles Puyol but got his header all wrong, missing the target from close range, and the one time he got behind Puyol and company he shot straight at goalkeeper Victor Valdes.

Despite that, the Spanish side’s dogged skipper described Neymar as “a wonderful player.”