Companies on alert due to risk of further instability

Companies on alert due to risk of further instability 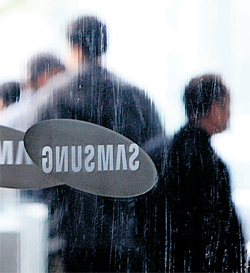 Companies, however, were keenly monitoring the news as they remain vulnerable to indirect effects such as changes to currency exchange rates.

Samsung Electronics, the flagship subsidiary of the country’s largest conglomerate, said it was “inappropriate” to comment on the matter due to the presiding mood of uncertainty, adding that it is not engaged in any business with North Korea. LG Group echoed similar sentiments.

Hyundai Motor Group, the country’s second-largest conglomerate, said it is closely monitoring the news to see whether it has an impact on the local currency, but that it has not created an emergency team to deal the issue.

“As we are an export-oriented company, we could be impacted .?.?. [ by] fluctuations in the won-dollar currency exchange rate,” a Hyundai official said. “But all we can do now is to enhance our monitoring.”

He described the possibility of the group adjusting its business plans for next year, which have yet to be announced, as “very low.”

SK Group also said that SK Corporation, its holding company, will closely hedge against the possible impact on the country’s macro economy including currency, oil prices and interest rates.

The South Korean companies that are operating in the Kaesong Industrial Complex are also “keenly watching” government responses following the death of the North Korean leader while operating normally at the industrial park, officials said.

“There is not much that individual firms can do at this point, so we are waiting for directions from the government,” said one representative of a South Korean firm in the complex. There are 123 domestic firms operating in the industrial park, most of which are small and mid-size firms manufacturing clothes, utensils and watches.

The Federation of Korean Industries (FKI), the country’s largest business interest group, expressed concern that Kim’s death could destabilize inter-Korean relations, which would in turn negatively affect the local economy.

“The government should be prepared to cope with any contingencies arising from the death of the North Korean leader,” the FKI said in a statement.

Local firms have been struggling recently due to the negative effects of the debt crisis in the euro zone as well as the slower than expected recovery seen in major economies like the U.S. Korea’s vulnerability to external uncertainties has been highlighted as an issue the government needs to tackle.

The Korean Employers Federation also said the government should “not let the country’s economy lapse into chaos and unrest while it is already facing a tough economic situation.” It urged the government to remain on full alert against all possible eventualities.

Meanwhile, local carriers including Korean Air and Asiana Airlines prepared for the possibility of military aggression from Pyongyang by loading their fleet of aircraft with additional fuel.

Tour agencies also expressed concern that overseas travelers, especially those from Japan and China, would cancel their trips to Korea due to tightened security concerns in the peninsula.

“So far there have not been any cancellations,” said an official from Hana Tour, the country’s largest agency. “In the past, however, many foreigners, particularly Japanese, canceled their trips during times of security risks or uncertainty on the peninsula.”

The Korea Tourism Organization held an emergency meeting yesterday, during which officials expressed concern over whether Korea would still be able to attract 10 million foreign visitors this year as forecast.

Korean retailers, including department stores and discount stores, are also worried that consumer sentiment will contract at the end of the year, when consumption levels usually spike.

“We haven’t seen any noticeable changes, such as a drop in the number of consumers, as it’s been less than a day since the news broke,” said an official from Lotte Department Store.”

Local business lobby groups were more vocal yesterday on the fallout of the news, calling on the government to beef up its efforts to prevent Kim’s death from having a negative impact on the local economy.

The Ministry of Knowledge Economy, which handles economic policy as it relates to industrial and energy sectors, held an emergency meeting to discuss the possible impact on the country’s real economy.

“We will continuously monitor the impact of Kim Jong-il’s death on our firms, industries, trade and the energy sector,” the ministry said in a release. “There has not been any impact so far on exports and imports, however, even though the Kospi fell sharply immediately after the news broke.”

The official added that “the blueprint for dealing with this issue is similar to how we reacted when North Korea attacked Yeonpyeong Island [last November].”