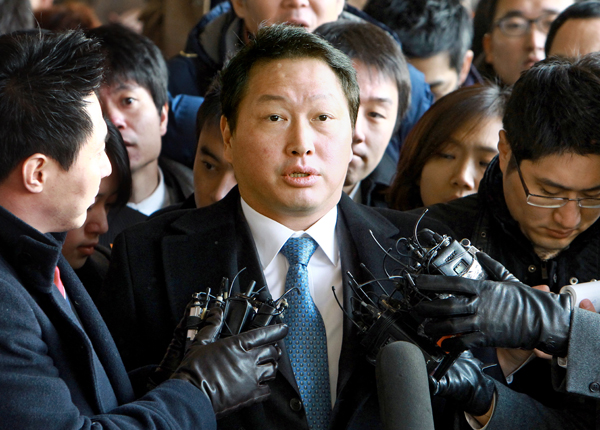 SK Group Chairman Chey Tae-won answers journalists’ questions before appearing at the Seoul Central District Prosecutors’ Office yesterday in southern Seoul over allegations that he embezzled a large sum of group funds together with his younger brother. [YONHAP]


Prosecutors have summoned the chairman of SK Group over suspicions that he embezzled huge group funds in collusion with his younger brother.

SK Group Chairman Chey Tae-won entered the Seoul Central District Prosecutors’ Office in southern Seoul at around 9:25 a.m. yesterday after being notified of the summons on Friday.

“I apologize for causing any distress due to my personal affairs,” Chey told reporters. “It seems that there are some suspicions and misunderstandings linked to me, but I will answer [prosecutors’ questions] as sincerely as possible.”

Chey, 50, is suspected of misappropriating part of a 280 billion won ($238.3 million) investment fund set aside by 18 affiliates of the country’s third-largest business group.

The prosecution is believed to have determined that former SK Group executive Kim Jun-hong misappropriated nearly 100 billion won out of the 280 billion won SK Group investment fund deposited at Benex Investment, a venture capital fund, which Kim now heads. He was indicted on embezzlement charges earlier this month.

About 50 billion won of the misappropriated funds were diverted to another former SK Shipping executive, Kim Won-hong, who was helping Chey purchase futures at the time, prosecutors said.

Sources said the older Chey flatly denied the allegations, claiming he was unaware of the alleged embezzlement and that he played no role in it. He reportedly said it would be easy for him to raise 50 billion won using his own shares as security, so there would have been no reason for him to order his employees to raise funds illegally.

His appearance in front of prosecutors comes eight years after he was arrested and indicted on charges of inflating the 2001 profits of the conglomerate’s trading arm, SK Global, by 1.5 trillion won. He was given a prison term of three years with a five-year stay of execution by the Supreme Court in 2008, and was granted a special amnesty on Aug. 15 of that year, when Korea celebrates its Liberation Day.

Yesterday morning, employees at SK Group’s headquarters in central Seoul were seen crowding around television sets showing footage of the chairman handing himself over to prosecutors as they discussed his likely fate and how this would affect the group and its affiliates.

“We were hoping that all the allegations surrounding the group would be cleared up after [Chey Jae-won] was questioned,” said one of the group’s executives. “Now that the chairman has been called in, it’s a bit depressing. We are concerned about a possible leadership vacuum.”

Another senior official at the group said the chairman was not believed to be involved in the case. “Our official position is that Chairman Chey Tae-won was not at all involved in the embezzlement case alleged against his younger brother.”