Salarymen dream of, and fret over, executive posts

Salarymen dream of, and fret over, executive posts 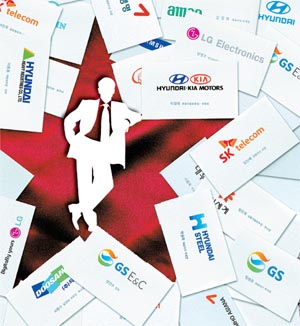 For most Korean salarymen, being promoted to an executive level is a star appointment akin to becoming an army general, replete with all the corporate spoils of war, including a generous pay rise and five-star travel perks, but also ramped-up levels of stress that many find a nightmare to cope with.

This issue tends to fall under the spotlight at this time of year as the nation’s biggest conglomerates - Samsung Group, Hyundai Motor Group, SK Group and LG Group - usually conduct their annual promotions just before Christmas. Samsung and LG announced their respective reshuffles last week, which immediately became headline news across the nation. Samsung promoted as many as 501 officials to its upper echelons, the largest number ever.

According to the latest survey by the Korea Employers Federation, it takes 23.6 years on average for a college graduate to become an executive official at a domestic conglomerate. Of every 1,000 entry-level employees, only eight end up making the grade. And the ratio has gotten worse over the last five years, falling from 1.2 percent in 2005 to 0.8 percent this year.

At Samsung, if a regular manager gets promoted to an executive official position, his annual salary more than doubles to at least 150 million won ($129,500) in the first year alone. With profit sharing and productivity incentives factored in, this increases to 200 million won. Senior vice presidents at Samsung are also given a choice of a Renault Samsung SM7, Kia K7 or Hyundai Grandeur HG - all sedans with 3-liter engines. Furthermore, those whose work includes external relations are given memberships to exclusive golf clubs. And when they head off on business trips, business-class tickets and five-star hotel rooms are par for the course.

As Samsung recently promoted over 500 employees to executive levels, however, many employees found themselves heading in the other direction. In Korea, executive positions are by no means guaranteed, but are subject to annual appraisals. Fortunately for Samsung staffers, the terms are not so bad, and even those who retire are guaranteed 70 percent to 80 percent of their salaries for the next two years, when they can serve as standing advisors to the company.

One 55-year-old executive director at a famous hotel chain in Korea, who gave his surname as Lee, said his life was transformed when he was promoted two years ago, 23 years after he joined the company as an entry-level employee. “Although I am physically and mentally tired, I want to keep this title because of the huge financial benefits,” he said, conceding that he has almost no time to spend with his family or rest nowadays. But in Lee’s mind, his annual salary of 130 million won, his SM7 and business-class tickets make it a worthwhile trade off.

Such huge financial benefits explain why so many Korean salarymen dream of gaining the so-called star promotions. But as Lee acknowledged, there are enormous burdens that follow.

“Serving as an executive official has put a significant burden on my shoulders,” Lee said. “I now have a lot more responsibility at work. This is the main difference between being an executive and being a regular employee.”

However, executives also have to deal with employment contracts that are renewable on a 12-month basis. As such, they are known as yimwon, an abbreviation of yimsijikwon, or temporary employees in Korean. What makes this such a stressful state of affairs is that the contracts are only renewed if they show tangible achievements.

“I would be fired immediately if I were unable to prove that I had made significant achievements,” Lee said. “I am always aware of the fact that I could get the ax.”

Living in this pressure-cooker environment sees many executives turn to psychiatrists for counseling. Yoon Dae-hyun, a professor at Seoul National University Hospital, proved there is a higher risk of depression among executives than lower-level staff.

Yoon conducted a survey on 500 executives who had checkups at his hospital from July 2009 through June 2010. Up to 65 officials, or 13 percent, were diagnosed with depression. Including those who admitted to having a history of depressed episodes, the total moved up to 25 percent. The corresponding rate for more junior employees was estimated to be 9 percent. “About 80 percent of their stress comes from work, including retirement, competition for promotions, worries about falling profitability and conflicts with colleagues,” Yoon said. Among 500 executive officials at large firms, 46 percent suffered from lethargy and another 25 percent suffered from insomnia, according to Yoon.