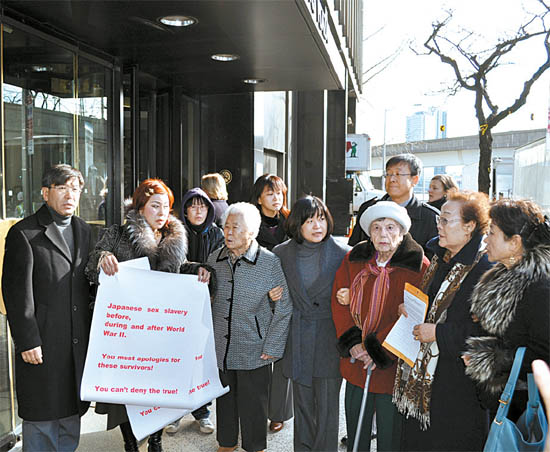 Lee devoted 45 minutes of his hour-long meeting with Noda on the issue, requesting an official government apology and compensation for the so-called “comfort women,” but Noda resisted Lee’s calls saying that its government’s position remained unchanged.

“First of all, we should have true courage to resolve the issue of wartime sex slaves, which is an obstacle to bilateral relations between Korea and Japan,” Lee said. “We urge you, the prime minister, to take the initiative in resolving this.”

Lee added, “The average age of Korean sex slaves is 86. After the remaining 63 comfort women who lived with unresolved pain pass away, we will lose their voices [on the issue], which will leave a big burden on both countries. We expect a major political decision at the national level from you, rather than a practical, working-level idea.”

Noda refused, telling Lee, “You know our legal position,” he said, referring to Japan’s stance that 1965 treaties between the two nations already settled the matter. “We will use our wisdom on a humanitarian basis.” 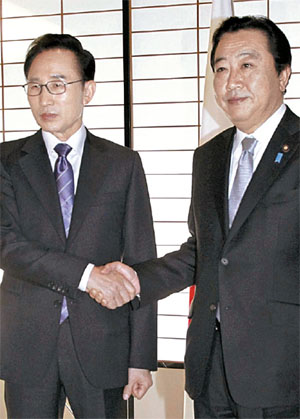 According to the Blue House, Noda brought up a series of diplomatic issues at the meeting, but Lee focused mostly on resolving the comfort women issue. “We didn’t know that the president would bring up the issue so strongly,” a Blue House official said.

A statue, dubbed the Peace Monument, erected by former comfort women in front of the Japanese Embassy last week also became a source of contention between the two leaders.

The statue is of a young Korean girl in hanbok, or traditional dress, seated and staring at the Japanese Embassy, a poignant symbol of the comfort women’s perseverance in calling for Japan to accept responsibility for their war crimes.

The statue, however, elicited protests from Japan, which has demanded its removal, including Noda to Lee yesterday. But Lee told Noda, “If you don’t take sincere action, a second and third Peace Monument will be erected.”

The Ministry of Foreign Affairs and Trade warned that Japan risked damaging its national image if it failed to address the issue of Korea’s comfort women because it was a humanitarian issue and not a territorial dispute such as over the Dokdo islets.

A government official said, “Without taking any measures to solve the problem but only demanding the removal of the monument, Japan’s national image will be damaged as a country of war criminals that abused human rights of women.”

Korea has beefed up its efforts for the comfort women since August when the Constitutional Court ruled that the government had neglected to resolve the issue. In September, Korea proposed a bilateral meeting to renegotiate the 1965 ROK-Japan Normalization Treaty that exempted Japan from paying individual compensation to the women, but Japan rejected the request. Korea is now taking steps to call for international arbitration over the issue.