A tearful anchorwoman on the North’s Korean Central Television announced Kim’s death in a special broadcast at noon yesterday.

Kim, who was named successor to his father, North Korean founder Kim Il Sung, in 1974, became the National Defense Commission chairman in 1993, which remained his most powerful official position. After his father’s death in 1994, he took charge of the reclusive Communist country and his father was named “eternal president.” 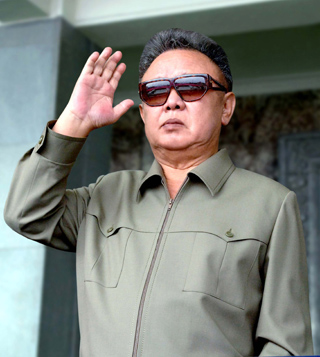 “Due to accumulated physical and mental fatigue, he suffered from acute myocardial infarction, followed by severe heart shocks,” KCNA said. “All emergency medical actions were taken immediately, but he died at 8:30 a.m. on Saturday.”

The report said an autopsy was performed Sunday to confirm the cause of death.

After the North’s announcement, the South Korean government held emergency meetings to discuss the situation. The South’s military and police raised their alertness, while President Lee Myung-bak held an emergency national security council meeting and urged the public to remain calm. He also had a talk on the telephone with U.S. President Barack Obama, and they agreed to cooperate in watching the situation in the North.

North Korean media reports said Kim’s body will be placed at the Kumsusan Memorial Palace in Pyongyang, also known as the Kim Il Sung Mausoleum. The national mourning period began Saturday and will continue until Dec. 29. Mourners will be received from today until Dec. 27, and the funeral ceremony will take place in Pyongyang on Dec. 28, the reports said.

The North said it will not receive delegates from foreign countries.

North Korea formed a 232-member funeral committee, which gave an indication of the power elite who will run the country in the post-Kim era. The first name on the list was his youngest son Kim Jong-un, the designated successor, and he was given the title “comrade,” signaling that he will be in charge of the funeral ceremony. Other key members of the North Korean leadership, including Kim family members, cabinet ministers and senior military officials, were on the list without titles.

A massive memorial ceremony for Kim will be held on Dec. 29. The entire population of the North will fall silent for three minutes, and trains and ships will blow their horns. A salute of guns will also be fired in Pyongyang and major cities around the North.

The announcements of Kim’s death glorified the North Korean leader’s achievements, calling him a great revolutionary who has wisely led the Workers’ Party, military and the people for a long time. His efforts to uphold the North’s founding ideology of juche, or self-reliance, to build a strong country with a “military first” policy were highlighted in the announcements. Kim was also praised for having made the North an “untouchable nuclear power.”

The joint statement confirmed the third-generation dynastic succession in the North. “Today, comrade Kim Jong-un, the great successor of the juche revolution and the excellent leader of our party and military, is standing on the frontline of our revolution,” it said, urging North Korea’s people to transform their grief into courage under the young leader’s leadership.

While concerns grew in the South about possible security instability on the Korean Peninsula following Kim’s death, domestic and international news wires reported that the North fired at least one missile into the East Sea yesterday.

“The North test-fired a short-range missile in the morning,” a senior government official was quoted as saying yesterday by Yonhap News Agency. “The military in the South has been tracking the situation, and we believe it is not linked to Kim’s death.”

The source told Yonhap that the missile fired yesterday morning was believed to have a range of 120 kilometers (75 miles), and the firing was probably part of a preplanned test to check its capabilities.

Another military official also told Yonhap yesterday that the missile firing was seen as a test, not an armed provocation. He, however, refused to discuss the details of the incident, including the location.