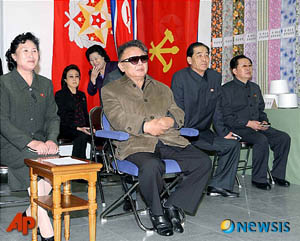 North Korea reportedly told the United States last week that it would consider suspending its uranium enrichment program, giving a potential boost to hopes of restarting the long-stalled six-party talks, according to sources familiar with the matter.

The suspension of its nuclear facility in Yongbyon has been a precondition laid out by the United States and the South for the resumption of the six-party talks on the North’s denuclearization as well as for a third round of Pyongyang-Washington talks.

The reported move comes less than three weeks after North Korea publicly told U.S. Secretary of State Hillary Clinton that it could not give up its uranium enrichment program because it said that it had the right to use nuclear energy in a peaceful way.

Experts believed the North’s apparent change of heart on its nuclear program is linked to the recent bilateral meeting between the United States and North Korea in Beijing on Thursday and Friday. There, Robert King, U.S. special envoy for North Korean Human Rights Issues, and Ri Kun, director general for North American affairs at North Korea’s foreign ministry, agreed on U.S. assistance of 20,000 tons of nutrition every month for a year.

According to a diplomatic source in Seoul, the nutrition assistance to be provided will be in the form of biscuits and vitamins, instead of rice or flour, in order to ensure that the aid goes to children and not the military. The North also reportedly agreed to allow more American officials to monitor the distribution of aid.

Experts also said that North Korea was now desperately preparing for next year’s promise to become a “strong and prosperous nation” by bringing in more international aid.

“Before the start of 2012 and founder Kim Il Sung’s birthday on April 15, the most desperate thing for the North Korean regime is distributing food to its people,” an official from the Ministry of Unification told the JoongAng Ilbo.

“Additionally, if the United States begins the assistance, it would enable other countries to provide further assistance to North Korea as well.”

A government official told the JoongAng Ilbo, “It will take a lot of time to make preparations to provide 20,000 tons of aid per month. If North Korea doesn’t wrap up the matter of suspending its nuclear facility, vessels carrying the aid will not leave port.”

Another government official said, “I agree on reconvening a conversation on the Korean Peninsula, but we still have lots of obstacles, such as persuading North Korea to accept IAEA inspectors and resuming inter-Korean family reunions.”