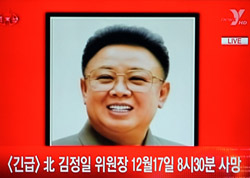 OBITUARY-Kim Jong-il: a reclusive leader in a hermit state North Korean leader Kim Jong-il, revered at home by a propaganda machine that turned him into a demi-god and vilified in the West as a temperamental tyrant with a nuclear arsenal, has died, North Korean state television reported on Monday.
Kim, who was 69 years old, died on Saturday, it said.

Kim was the unchallenged head of the reclusive state whose economy fell deeper into poverty during his years in power as he vexed the world by developing a nuclear arms programme and an arsenal of missiles aimed to hit neighbours Japan and South Korea.
Kim had been portrayed as a criminal mastermind behind deadly bombings, a jovial dinner host, a comic buffoon in Hollywood movies and by the administration of former U.S.
President George W. Bush as the ruler of "an outpost of tyranny".
He was thought to have suffered a stroke in August 2008. Known at home as "the Dear Leader", Kim took over North Korea in 1994 when his father and founder of the reclusive state Kim Il-sung, known as "the Great Leader", died.
Kim Jong-il, famed for his bouffant hair-do, platform shoes and jump suits, slowly emerged from his father's shadows to become one of the world's most enigmatic leaders who put North Korea on the path of becoming a nuclear power.
His state was also frequently cited as a threat to global stability.

EARLY YEARS
Despite being on the world stage longer than most world leaders, little was known about Kim. He rarely spoke in public, almost never travelled abroad and has an official biography that is steeped in propaganda but lacking in concrete substance.
Kim had a host of titles in North Korea, but president was not one of them. Kim Il-sung was given the posthumous title of president for life, while his son's most powerful posts included the chairman of the National Defence Commission, the real centre of power in North Korea, and Supreme Commander of the Korea People's Army. North Korean propaganda said Kim Jong-il was born on Feb.16, 1942, at a secret camp for rebel fighters led by his father near Korea's famed Mount Paektu.

But analysts say he was likely born in the Soviet Union when his father was with other Korean communist exiles receiving military and other training. His official biography said that in elementary school he showed his revolutionary spirit by leading marches to battlefields where Korean rebels fought against Japanese occupiers of the peninsula.

By the time he was in middle school he had shown himself to be an exemplary factory worker who could repair trucks and electric motors.
He went to Kim Il-sung University where he studied the great works of communist thinkers as well as his father's revolutionary theory, in a systematic way, state propaganda said.
North Korea analysts said however, Kim lived a life of privilege in the capital, Pyongyang, when his family returned to the divided peninsula in 1945. The Soviets later installed Kim Il-sung as the new leader of North Korea and the family lived in a Pyongyang mansion formerly occupied by a Japanese officer. Kim Jong-il's younger brother mysteriously drowned in a pool at the residence in 1947.
Kim likely spent many of his younger years in China to receive an education and to keep him safe during the 1950-1953 Korean War, analysts said.

ANOINTED SUCCESSOR
After graduating from college, Kim joined the ruling Worker's Party of Korea in 1964 and quickly rose through its ranks. By 1973, he was the party's secretary of organisation and propaganda, and in 1974 his father anointed him as his
successor.
Kim gradually increased his power in domestic affairs over the following years and his control within the ruling party greatly increased when the younger Kim was given senior posts in the Politburo and Military Commission in 1980.
Intelligence experts say Kim ordered a 1983 bombing in Myanmar that killed 17 senior South Korean officials and the destruction of a Korean Air jetliner in 1987 that killed 115.
He is also suspected of devising plans to raise cash by kidnapping Japanese, dealing drugs through North Korean embassies and turning the country into a major producer of counterfeit currency.
Kim was known as a womaniser, a drinker and a movie buff, according to those people who had been in close contact with him and later left the country. He enjoyed ogling Russian dancing girls, amassing a wine cellar with more than 10,000 bottles and downing massive amounts of lobster and cognac.
North Korea's propaganda machine painted a much more different picture.
It said Kim piloted jet fighters -- even though he travelled by land for his infrequent trips abroad. He penned operas, had a photographic memory, produced movies and accomplished a feat unmatched in the annals of professional golf, shooting 11 holes-in-one on the first round he ever played.
When he first took power in 1994, many analysts thought Kim's term as North Korea's leader would be short-lived and powerful elements in the military would rise up to take control of the state.
The already anaemic economy was in a shambles due to the end of the Cold War and the loss of traditional trading partners.
Poor harvests and floods led to about 1 million people to die in a famine in the 1990s after he took power.
Despite the tenuous position from which he started, Kim managed to stay in power. He also installed economic reforms that were designed to bring a small and controlled amount of free-market economics into the state-planned economy.

NUCLEAR POWER
His greatest moment may have come on June 15, 2000, when he hosted the first summit of the leaders of the two Koreas when then South Korean Kim Dae-jung visited Pyongyang.
Kim's image was transformed from a feared and mysterious leader to a kind-hearted host who had the world knocking on his door. A landmark summit with then U.S. Secretary of State Madeleine Albright and Russian President Vladimir Putin soon followed the visit by South Korea's president.
The ray of sunshine out of the North then came to an end.
In 2002, tension rose after Washington said Pyongyang had admitted to pursuing a nuclear arms programme in violation of a 1994 agreement that was to have frozen its atomic ambitions.
North Korea expelled International Atomic Energy Agency inspectors in December 2002 and said in January 2003 it was quitting the nuclear Non-Proliferation Treaty.
In February 2005, North Korea said it had nuclear weapons and in October 2006, it rattled the region by exploding a nuclear device. North Korea conducted a second nuclear test in May 2009.
Kim Jong-il reportedly told visitors that it was the dying wish of his father to see the Korean peninsula free of nuclear weapons and he wanted to work toward that end, but he first wanted to see the United States treat his state with respect.
Tensions heightened to their highest levels in years in 2010 with the torpedoing of a South Korean warship, killing 46 sailors. The South blamed the attack on Pyongyang, but North denied responsibility. Later that year, the North bombarded a South Korean island, the first such attack against civilian
target since the 1950-53 Korean War.
This year, Kim's health appeared to have improved and he visibly gained weight. He visited China twice and travelled to Russia for the first time in nearly a decade.
Kim has three known sons. He is believed to have anointed the youngest, Kim Jong-un, to succeed him.
REUTERS