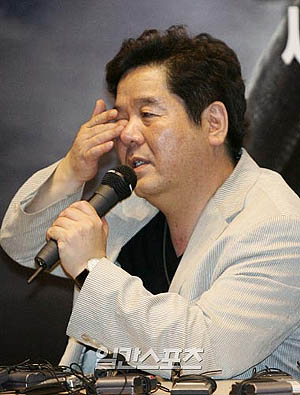 Under the ruling, 43 employees are to receive their compensation using proceeds from a foreclosure auction of the company’s building in Ogok-dong, Gangseo District, western Seoul, which is estimated to be worth 3.7 billion won. The court is scheduled to divide the auction proceeds among Shim’s creditors in January, with the former employees receiving priority. Shim chose not to defend himself at the trial.

The employees of Younggu Art had submitted a petition asking for unpaid wages to the Ministry of Employment and Labor on Aug. 1. The ministry brought Shim in for questioning on Aug. 19 and handed the case over to prosecutors in October.

In a recent interview with the JoongAng Ilbo and JTBC, Shim apologized to his employees for not paying their wages and promised to pay back the money he owed. Shim said that his impractical investments in movies caused financial problems, driving his company into bankruptcy.

Shim said he secured 5 billion won from a savings bank when he was producing the movie “D-War” in 2004, which became his biggest liability. But while Shim claimed that he considered the money an investment from the bank, the bank told him it was a loan and demanded monthly interest payments. The case went to court, and Shim won the first trial before losing the appeal. Following the loss, his home and the Younggu Art building were seized by the court.