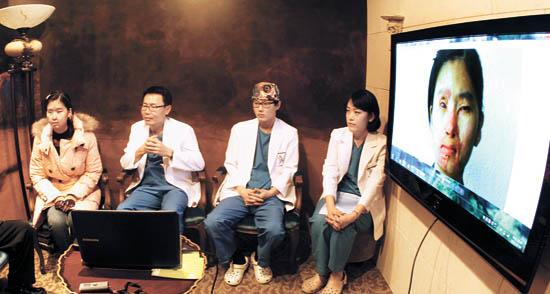 She wasn’t there for double eyelids or a new nose but to restore her facial features two years after her father poured acid on her in a horrifying attack.

Tan, from Malaysia, had been sleeping at home when her father attacked her and her mother. She received serious burns on her face and body and lost vision in her right eye. Her mother died.

Her father sits in a Malaysian prison, charged for the murder of his wife and grievously wounding his daughter.

Inside the clinic, Tan carefully removed her sunglasses and mask in front of three doctors.

Her face is covered in deep scars from the third-degree burns. Her eyebrows and hair are nearly gone, and her nostrils were closed shut by the melting flesh.

“We’ll either insert a lens, similar to contact lenses, to your blinded eye or replace it with an artificial eye,” said Dr. Joo Kwon, director of the clinic.

A smile spread across Tan’s face, once believed to be irreparably burned.

Her visit to Korea came after a Malaysian lawmaker helped her connect with JK Plastic Surgery Clinic through the Ministry of Health and Welfare’s Medical Korea project, which provides pro bono surgery to foreign patients in need of highly sophisticated work that Korean doctors can provide.

Tan’s surgeries and treatment, expected to total about 50 million won, will be paid for by the clinic, while her accommodations, airfare and living expenses are being covered by the Ministry of Health and Welfare and the Malaysian government.

Tan will undergo three operations, with the first one scheduled for today.

“If the surgery goes smoothly as planned, she will have 70 to 80 percent of her features back,” said Dr. Joo.

Doctors plan to do a hair transplant and eyebrow embroidery for Tan. She will also get a skin graft on her face using skin from her arm. Her nostrils will be reopened by grafting cartilage from her ear.

“If I become pretty, I want to take self-portraits,” said Tan. “[After the surgery], I’ll live a life with full confidence.”

While many foreigners visit Korea for plastic surgery for cosmetic purposes, data shows that more and more foreigners are coming for medical reasons, such as Tan.

According to Hallym University’s Hangang Sacred Heart Hospital, which has the country’s only plastic surgery center for burn patients, about 2,000 people from both home and abroad visit the center each year. The center said about 70 to 80 burn patients come to receive plastic surgery from countries like China, Mongolia and Indonesia.

A 35-year-old woman from China recently came to Seoul to visit Hangang Sacred Heart Hospital after hearing about its plastic surgery center. Burned on her face as a young girl, the woman had given up on restoring her facial features after several unsuccessful operations. But she found success in Korea, receiving a successful bone graft. She’ll return in three months to receive a skin graft.

The Malaysian lawmaker who helped Tan come to Seoul, Jeff Ooi, said he connected her to JK Plastic Surgery Clinic because “Korea is known as the best in the field of plastic surgery.”

For Tan, the visit is a chance for her to get her life back to a semblance of normalcy - a college student who has aspirations of becoming an accountant.