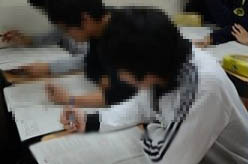 At a high school in Seoul’s Gwangjin District, a 17-year-old student surnamed Kim studies until 5 a.m. in preparation for final exams and is one of many adolescents nationwide who are sleep deprived, getting only four hours of sleep a night. Because of sleep deprivation, he has become increasingly agitated and is more likely to lash out at his parents and friends.

Even when it’s not exam time, he usually gets just five hours of sleep a night. Consequently, he resorts to napping at school any chance he gets, often sleeping on his desk.

Kim admitted, “Sometimes it becomes so unbearable I feel like causing an accident.”

Recent studies show that adolescents who sleep less have a higher chance of showing deviatory behavior, such as drinking and smoking.

The Korea Centers for Disease Control and Prevention revealed last week the results of its 2011 online study on youth behavior, which surveyed 80,000 students from the first year of middle school to senior year of high school, from 800 schools nationwide.

Kim Yun-jeong, researcher at the Korea Centers for Disease Control and Prevention, said, “Attending hagwon late into the night, having part-time jobs and playing online games have contributed to the decrease in adolescents’ sleeping hours.”

The studies indicated that lack of sleep also had the negative influence of inciting adolescents to become more vulnerable to the temptations of smoking and drinking.

The study further showed that sleep deprivation was correlated to higher suicidal impulses.

Dr. Hong Seung-bong, neurologist at Samsung Medical Center, said, “When you are deprived of sleep, stress-inducing hormones like cortisol are secreted excessively, which leads to emotions being unstable and a higher chance of depression.”