Public shocked but calm compared to 1994

Public shocked but calm compared to 1994 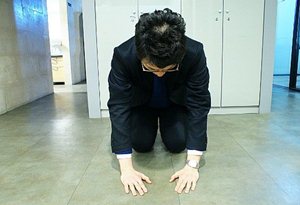 Hundreds of people were seen crowding in front of televisions in public areas across the country, trying to watch news reports, while others frantically poked and prodded their smartphones for more details on the breaking news.

Some people cried out in celebration, while others voiced concerns over potential escalations between the two Koreas, including a war.

“I was bewildered at first, but now I’m glad,” said Seoul resident Lee Kyu-ho, 78, who described himself as strongly anti-North Korea. “I hope the death of Kim Jong-il will bring unification of the North and the South.”

Parents of sons currently serving in the military took the news seriously, worried for their children’s safety.

“My son is currently serving in the Marine Corps in Pohang,” said Lee Hyung-ok, 52, who said she was worried sick that her son could be dispatched to the front lines in case of war. “I’m pretty sure that all parents who have sent their sons to the military would be alarmed by the news.”

But some South Koreans said Kim’s death was not a big deal.

“When North Korea’s founder Kim Il Sung died, the media and citizens in South Korea were in shock, and the country was noisy for several days, but nothing much happened,” said Huh Seung-jin, 27, an oriental medicine doctor in Seoul. “Plus, we were aware that Kim Jong-il’s health was poor. His death was somewhat anticipated.”

Lee Sung-jae, 21, a college student, said, “I wasn’t aware that Kim Jong-il’s death was such a big issue until the huge media coverage. Right now, I’m confused by people’s diverse reactions, and I don’t know whether I should take this seriously or not.”

Among these mixed reactions, many people expressed anger at their government for being blindsided by yesterday’s news.

“I heard that the government found out about the news the same time as the public, even though the death occurred two days ago,” said Min Sang-hyeok, 34, an office worker in Seoul. “I think I’ve lost trust in the country’s national security.”

In contrast to the panic in South Korea in 1994 when Kim Il Sung died, members of the public yesterday appeared to take the news more calmly. In 1994, South Koreans, fearing a war, flooded supermarkets to purchase daily necessities, cleaning out shelves across the country. However, reports yesterday said that daily necessities such as water, noodles and canned foods were still in stock.

Kim’s death quickly became the main subject on social networking services, including Facebook and Twitter, yesterday afternoon. Many young South Koreans posted critical comments online about Kim’s death, such as one user who wrote, “The notorious cold-blooded leader deserves death.” Those who posted on Twitter wishing Kim to “rest in peace,” meanwhile, were criticized by a flood of replies, calling such comments “irrational” and the posters “commies.”

The official Twitter account for coffee chain Tom N Toms posted yesterday afternoon, “It’s sad to see some people expressing joy while some express fears over a death of a person. Rest in Peace Kim Jong-il.”

After a flood of criticism, the tweet was deleted, and Tom N Toms posted an apology saying that “it was a posting by an individual employee.”