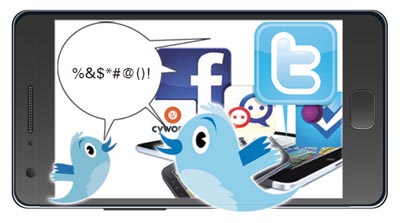 In early November, in the midst of protests over the potential passage of the Korea-U.S. free trade agreement, an alarming message went out on Twitter.

“One female college student participating in an anti-FTA rally was strangled to death when hauled away by police,” the post read. “The corpse was found in North Chungcheong, but the case is being covered up by the police.”

Thousands of people retweeted the disturbing report, sparking outrage and feeding conspiracy theories. The accusation became so widespread that the Seoul Metropolitan Police Agency launched an investigation, tracking the tweet to a Korean man in his 40s surnamed Kim, who lives in the United States, whom they said had disseminated false information online.

The use of social networking services in Korea reached a new high this May, with a total of 5.1 million people accessing either Twitter or Facebook - sites that are not subject to the real-name verification law - on their mobile phones, a phenomenal increase of 1,059 percent on-year, according to market researcher Metrix Corporation.

SNS enable people to connect and interact with unprecedented speed and ease, which can both empower users, spread out-and-out lies and magnify public disorder. Yoon Seong-ee, professor of political science at Kyunghee University, said the use of these platforms to spread politically driven rumors has become endemic in Korea.

“Unaccountable, groundless and skewed rumors regarding important issues in Korea like the FTA are being produced every day through these sites,” Yoon said. “They don’t require users to take responsibility for their stories or opinions.”

The effects of these postings are being underestimated, Yoon said.

“We should take this more seriously because social networking services have a bigger ripple effect than we realize,” she said. “People say the sites are their private communication space, so they don’t have to worry about whether or not information is true. But in reality, these communication tools are very influential, and we can’t afford to ignore them.”

The rumor about the death of an anti-FTA protester, titled “The truth of the college student’s death,” was actually an echo of a similar false rumor made during the 2008 anti-U.S. beef demonstrations by a local reporter, surnamed Choi, 47. Through several Web sites, Choi published an apocryphal story reporting on the death of a female college student after police detained her at a candlelight vigil. The reporter was later found guilty of libel and sentenced to 10 months in prison.

But the recent online postings, which stem from SNS users rather than reporters, are much more difficult to contain. Police said they discovered Kim, the original tweeter in the United States, had posted several messages online saying Seoul Mayor Park Won-soon was unqualified for his job. And now similar messages about Park can be found on major Web sites such as Naver and Daum.

“If an opinion or rumor gets huge attention from SNS users, it suddenly becomes mainstream or a fact that people can’t be against because people are afraid of being criticized or isolated,” said Professor Kim Young-seok of Yonsei University. “If someone has a biased perspective and finds a rumor that supports that view, that person will strengthen the rumor by spreading it around and collecting sympathizers.”

Politicians are also involved in the distribution of groundless claims. One of the most well-known producers of online rumors regarding the Korus FTA is Representative Chung Dong-young of the Democratic Party. Chung insisted that the president of Ecuador was almost ousted because Ecuadorians were adamantly opposed to their free trade agreement with the United States. According to his account, the president then shot down the FTA in order to calm the nation and maintain power.

This online rumor went viral, and the Ministry of Foreign Affairs and Trade felt the need to publicly disprove Chung’s narrative, noting that it was in fact the United States who ruptured the negotiations after a dispute over an oil company’s operating contract.

Online fallacies go beyond politics. According to the National Police Agency, a disturbing story about schoolgirls in Suncheon, South Jeolla, spread via Twitter in early November. Netizens claimed three teenagers had been kidnapped - one was supposedly found dead, while the other two remained missing.

In a very short period of time, Twitter users posted stories that seemed like eyewitness accounts. One tweeter, who Suncheon District Police have identified, wrote, “I saw one elderly woman who looks in her 60s taking the three girls in a van. The corpses were found in Suncheon, and their eyeballs and organs were extracted when police found them.”

Other messages insisted that the police were trying to cover up the kidnappings because of important upcoming international events, such as the 2012 Yeosu Expo and the 2013 Suncheon Bay Garden Expo. These postings have left police, trying to determine the validity of the case, perplexed.

“There was no kidnapping or trafficking as far as we know,” Inspector Yang Byeong-woo of the Suncheon District Police told the Korea JoongAng Daily. “We’ve questioned many students who posted strange rumors on their Twitter accounts, and the students said they’ve only posted stories they’ve learned about through hearsay.

“We can’t even count the number of messages posted on social networking services, and we certainly can’t investigate every absurd story,” Yang said.

As these groundless rumors spread throughout Korean society, voices demanding the regulation of SNS are growing.

“We definitely need to provide an institutional framework that ensures civil and criminal liability on a limited scale,” said Professor Song Ho-keun of Seoul National University’s social studies department. “I understand that it’s a private space, but if it influences national security or causes economic disorder, it’s time to discuss regulations.

“Social networking services are no longer a private communication tool being shared with acquaintances,” he said.