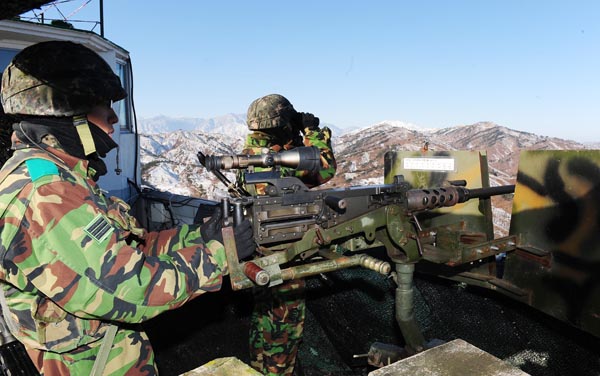 The South Korean government scrambled into emergency mode yesterday after it was left in the dark about Kim Jong-il’s death for over 48 hours until it was announced by North Korean media yesterday.

President Lee Myung-bak, whose birthday celebrations yesterday were scrapped, convened the National Security Council with cabinet ministers to discuss the country’s readiness and countermeasures against possible turmoil in the wake of Kim’s death by a heart attack on Saturday morning.

“President Lee confirmed at today’s meeting that the response measures drafted as part of the crisis management manuals are working as planned,” the Blue House said in a statement, adding that Lee urged the South Korean public to carry on with their normal economic activities.

The Blue House said that it would closely monitor North Korea and be ready for any emergency.

It also said it would work with allies and the broader international community to ensure peace and safety on the Korean Peninsula. Lee spoke with U.S. President Barack Obama by telephone at 2 p.m., with the leaders agreeing to keep a close watch on the situation and cooperate closely, Blue House spokesman Park Jeong-ha said.

Park Suk-hwan, the first vice minister of foreign affairs and trade, called ambassadors in key ally nations, such as the United States, China, Russia and Japan, to strengthen coordination and information sharing with those countries, Cho said.

All public sector workers were placed on an emergency work system, issued by the Ministry of Public Administration and Security, under which they are prevented from taking leave except for unavoidable situations.

The South Korean military, meanwhile, upgraded its readiness, with reports that the Seoul-Washington joint defense readiness condition was upgraded to Defcon 3 from Defcon 4, though the Joint Chiefs of Staff in Seoul declined to confirm it.

Kim Jong-il’s death came as a shock to the South Korean government, which admitted that it had not been aware of the news in advance. The Korean Central News Agency had announced it would air a special program two hours prior to disclosing Kim’s death, and Blue House officials had believed that it would likely be about the North’s nuclear program.

Some lawmakers criticized the South Korean government for being unaware of Kim’s death. “If our government had no leads about this fact, it means there is a serious loophole in our intelligence on the North,” said Representative Kwon Sun-taik from the Liberty Forward Party.

The South has yet to decide whether it will express condolences, according to a Seoul official. The North said it would not receive foreign envoys at Kim’s funeral, slated for Dec. 28 in Pyongyang.