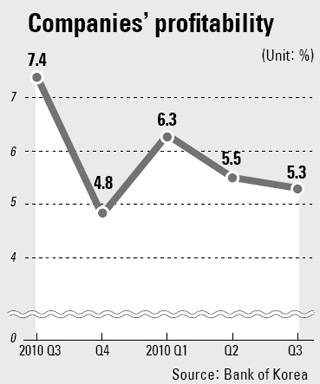 Korean companies saw their profitability drop in the third quarter as commodity prices surged and the global economy contracted.

According to a report by the Bank of Korea yesterday, the average operating profit to sales ratio of 1,522 listed companies stood at 5.3 percent during the July to September period, down from a median 5.5 percent in the second quarter. The central bank cited rising commodity prices as the main culprit behind the increase, as well as higher sales management costs.

The ratio has now fallen sharply since last year, when it stood at 7.4 percent in the third quarter, indicating that profits have shrunk.

Meanwhile, the ratio measuring their pre-tax net income to sales - another gauge of profitability - saw a significant drop from 5.6 percent in the second quarter to 3.1 percent. The central bank attributed the fall to the depreciation of the local currency. In the third quarter, the value of the Korean won retreated 8.6 percent to the U.S. greenback on-quarter. As a result, companies’ foreign debts grew larger.

They have also become less financially stable and moved further into debt, with the average debt to asset ratio shooting up from 97.4 percent in the second quarter to 102.1 percent in the third quarter.

Additionally, the proportion of companies that failed to repay the debt interest from sales rose from 30.2 percent in the second quarter to 35.5 percent. This is the highest rate since the first quarter of 2009, when it stood at 40.6 percent as the country was consumed by the after-effects of the global economic crisis.

“As external conditions have negatively impacted profitability, the growth and stability of listed companies has been retarded,” said a BOK official. “The Korean won has also continued depreciating and shed 100 won from the previous quarter to increase companies’ foreign debt burden,” he added.

The central bank also lowered its economic outlook for 2011 earlier this month as the sovereign debt crisis that began in Europe has started to affect the global economy.

Previously, the government and the BOK were still confident of achieving economic growth in excess of 4 percent when they revised the outlook from 4.5 percent to 4.3 percent in July. However, as the situation is Europe continues to see little improvement, and uncertainties cloud the global market, the Korean central bank was once again forced to change its projection. It now anticipates growth of 3.8 percent for this year and 3.7 percent for 2012.

When revising its outlook this month, the central bank noted that while the U.S. is still struggling with a stagnant housing market and slow recovery of its job market, European countries will continue to deleverage their debts as part of deepening austerity measures. As such, consumption is expected to fall in the U.S. and Europe, which both serve as major export markets for Korea.

The central bank projected that growth global trade will shrink from 6.6 percent this year to 5.4 percent in 2012.

This is likely to have a considerable impact on Korea’s economy as its reliance on exports has grown to now represent more than 50 percent of the nation’s GDP.