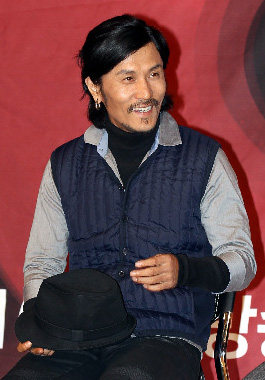 Singer Lee Ju-no has released a picture of his newborn daughter to the public.

Lee, former member of the popular Korean rock band from the 1990s Seo Taiji & Boys became a father for the first time on Dec. 19.
The former boy-band member became a parent one month earlier than planned as his girlfriend gave birth to their child prematurely.
Lee used his Twitter account to reveal the first picture of the child between himself and his soon-to-be wife who is 23 years his junior.

Along with the picture, the 44-year-old star tweeted, “Today a princess was born. I’m so happy that both my daughter and her mother are doing well.”
According to Lee’s representative, the singer’s wife went into labor unexpectedly after a routine check-up at the hospital. The infant weighed in at a healthy 2.85 kilograms (6.3 pounds) and both the child and mother are reported to be doing fine.
On Dec. 6, the rapper from the old school boy band revealed that his girlfriend of over one year was with his child. On SBS’ “Comeback Show Top 10,” the singer made the announcement before taking to the stage to serenade his wife-to-be. The couple claimed to be living together already and will tie the knot early next year.
By Carla Sunwoo [carlasunwoo@joongang.co.kr]