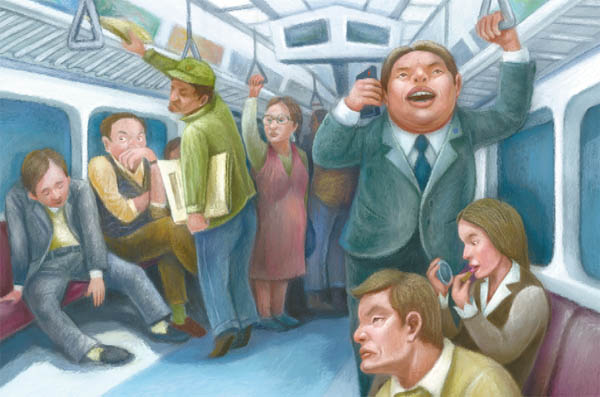 As a place where people meet, make friends, swap stories and argue, the subway system has seen its share of dramatic incidents over the years.

“The subway, for me, is life. You can’t possibly talk about Seoul, or any other major city around the world, without mentioning its subway culture,” said Cho Ae-gyeong, the head of public relations for Incheon Metro and Korea’s first female subway station manager. She recounted some of her experiences in a book of subway stories that was published in October.

As it happened, the book’s publication coincided with the 30th anniversary of Seoul Metro, which operates line Nos. 1 to 4.

Over the years, Seoul Metro has seen a total of 36.1 billion people riding its trains, compared to the 3,100 passengers during the subway’s first year.

At present, the Seoul subway system incorporates eight lines and has expanded further in recent years to include the new Bundang line. It is the world’s fourth-largest subway system in terms of number of passengers per year, a figure which currently stands at 1.4 billion and is surpassed only by Tokyo, Moscow and New York. The subway is the leading form of public transportation used by people in the capital, followed by buses, taxis and cars.

For the public, the story of Seoul Metro carries with it some of the most dynamic, memorable moments in modern Korean history.

“The opening ceremony for line No. 1 on Aug. 15, 1974, was supposed to be attended by then-President Park Chung-hee, but in the end, he couldn’t make it because the first lady, Yuk Young-soo, was assassinated that exact same day,” said Kim Jung-hwan, public relations director at Seoul Metro.

The first lady was assassinated on the morning of Korean Independence Day by a North Korean sympathizer.

“There are so many stories because Seoul Metro has the oldest lines,” Kim said. “There was a mother who gave birth to her baby in the station office at Jongno 3-ga Station in August 1976, and I remember the first coffee and cigarette vending machines being introduced in subway stations in 1978.”

Conflict on the rails

The subways have seen their fair share of arguments over the years. The most prominent conflict on the subway these days reflects the growing pains of a society still struggling to reconcile the values held by older generations with those of younger people. A recent incident illustrates the problem.

On Dec. 11, a foul-mouthed man in his 60s managed to make a Seoul subway train back up 170 meters (558 feet) from its designated stop with one fiercely aggressive complaint.

At around 4 o’clock in the afternoon, a line No. 7 train heading toward Junggye Station backed up the length of around eight subway cars because of a call from a man inside the train yelling that he had missed his stop. After the driver called the control center, he put the train in reverse and the train stopped for three minutes to drop the passenger off before starting up again.

But according to Seoul’s public transportation safety regulations, passenger complaints are not included in the situations in which a subway train is allowed to go in reverse.

“I heard on the news that there were around 700 passengers on the train at the time. Who would have been responsible if something had happened to them because the train backed up and stopped?” said Jung Myeong-su, 25, a graduate student who says he rides the subway at least three times a day. Jung said he is getting weary of older passengers who “think they can get away with disturbing the public order just because they are old.”

“Whenever I get on the subway during busy hours, I always see these rude old people who yell at young people for sitting down instead of offering them a seat or who yell, drunk and stinking of soju.”

Like the incident on Dec. 11, similar cases involving vocal, aggressive older passengers have added to the seemingly widening generation gap, especially in public transit. In particular, the subway noyakjaseok, which translates to “seats for the elderly and the infirm,” have sparked many an argument between young people and senior citizens who see the seats as belonging only to them.

Seoul Metro’s Kim attributes these conflicts to the fact that Korea is an aging society. He said with more senior citizens now than ever before, the arguments on subways have been increasing steadily over the last decade.

“Korea’s Confucian background and filial piety have caused conflict in modern times, especially with the number of senior citizens on the rise,” Kim said.

By the year 2020, senior citizens over 65 years of age will make up around 15 percent of the population, compared to 11 percent last year, according to government statistics.

The controversy over seats for the elderly is one thing, but for subway operators, a more crucial problem is the free subway ticket system, which provides unlimited free subway rides to adults above 65 years of age and children under 6. According to the Seoul Metropolitan Rapid Transit Corporation, which operates line Nos. 5 to 8 of the city’s subway system, 19.3 percent of all subway users in Korea use this free pass.

“The free subway ticket system was initiated by former President Chun Doo Hwan’s administration,” said Cho, the Incheon Metro PR director. “Chun’s father-in-law was the chairman of the Korean Senior Citizens Association, and he pushed for this system.”

The system gave discounts of 50 percent on subway fares for senior citizens and young children when the program started in 1980, but by 1984, the tickets had been made free.

“In terms of welfare, this system shouldn’t be abolished, but maybe offering a discount, instead of giving the tickets for free, would be a more realistic approach,” Cho said. “We are losing too much money on this.”

Better safety on board

The tensions between generations are yet to be resolved, but one thing subway operators have managed to improve upon over the years is subway safety.

One of the most successful policies initiated by metropolitan subway operators was the installation of screen doors on subway platforms to prevent accidents and suicides. The doors have also helped reduce noise and dust on platforms as well as electricity costs.

“All platforms in the Seoul subway system, from lines Nos. 1 to 9, had screen doors as of 2009,” said Choi Ji-yeon, a public relations manager at Seoul Metropolitan Rapid Transit Corporation. “This system has been one of the most effective in many ways for us, while also providing a cleaner, more pleasant atmosphere for passengers.”

In order to reduce sexual assault on subway trains, CCTV cameras have been installed and guards placed on platforms. There are 75 guards in Seoul subway stations, and subway operators plan to double that number by the end of next year. Also, by 2013, the city plans to install two CCTV cameras in each compartment of a subway train.

Living up to the country’s reputation as an IT hub, subway operators say that WiFi connectivity on the nation’s subway system is second to none.

In addition to the existing WiFi access in major subway stations in Seoul, Busan, Daegu and other cities, telecom giant KT has promised Internet access on all subway trains and buses in the next few years, starting with subway line Nos. 2, 5 and 8.

Seoul Metro, together with supermarket brand Homeplus, also introduced the world’s first digital grocery store at Seolleung Station on line No. 2. Using a smartphone app, customers can snap shots of a product’s bar code in order to make a purchase and have it delivered.

“When I first started with Incheon Metro in the 1990s, I had to go abroad to Europe and Japan several times a year to study their public transport systems. Now, they come here to learn our system,” Cho said.